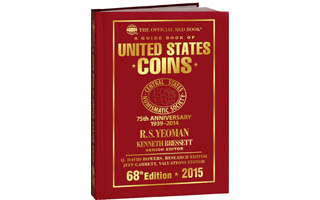 The Central States Numismatic Society is selling a special hardcover edition of the 2015 edition of A Guide Book to United States Coins, known commonly as the "Red Book.”

A total of 500 copies of the special Red Book will be available during the organization’s 75th Anniversary Convention in at the Schaumburg Convention Center in Illinois April 23 to 26.

The books cost $15 each or $20 if mailed, within the United States.

To order the book, contact CSNS Education Director Ray Lockwood at sunrayofmarion@aol.com or (765) 664-6520.

For complete details about the CSNS convention, visit www.centralstates.info.