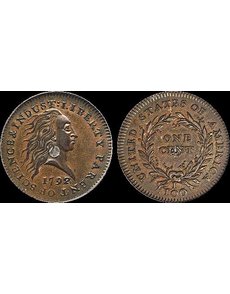 Over the past decade the spring Central States Numismatic Society convention has become one of the major rare coin auction shows of the year.

This year — and each year until 2016 — the convention will be held in the Chicago suburb of Schaumburg, Ill. Along with the summer American Numismatic Association convention and January’s Florida United Numismatists show, the CSNS convention has become one of the coin hobby’s bellwether shows that indicate both where the coin market is currently and where it is headed.

The highlight of the Heritage CSNS auctions was a 1792 Silver Center cent pattern graded Mint State 61 brown. It is a legendary rarity in early American numismatics, the result of an experiment by Chief Coiner Henry Voigt to produce coins that were compliant with a weight specified in the Mint Act of December 1792, without being unnecessarily large.

Voigt’s solution was to put a silver plug worth three-quarters of a cent into copper worth one-quarter of a cent. While the concept of a silver plug in copper cents was not adopted for mainstream coinage production, today these Silver Center cents serve as charming reminders of the adaptability of early Philadelphia Mint officials as they struggled to produce coins for a new nation.

Heritage’s description noted that its offering represented just the 54th auction appearance of any Silver Center cent and indicated that 13 other examples are known. The CSNS example is the third-finest known.

The Norweb example — the second-finest known and currently graded MS-64 brown — sold privately in 2011 for $2.5 million and sold later that year for $2.8 million.

The cent in the Heritage CSNS auction sold for $1,150,000 with the buyer’s fee to a bid that was placed online prior to the floor session.

As a sign of bidders’ increasing confidence in auction firms, the winning $1 million bid for the Silver Center cent was placed at least a week before the auction on Heritage’s website. As more and more top bids are being placed silently online prior to auctions — sometimes well in advance of the actual auction — excitement in a live floor auction can be somewhat compromised, because the bidder battle was online in the days before the sale.

Million-dollar coins are good for auctions in that they bring publicity, both within and beyond the coin collecting community.

By the time the auction concluded April 22, more than 9,000 lots were offered. ¦