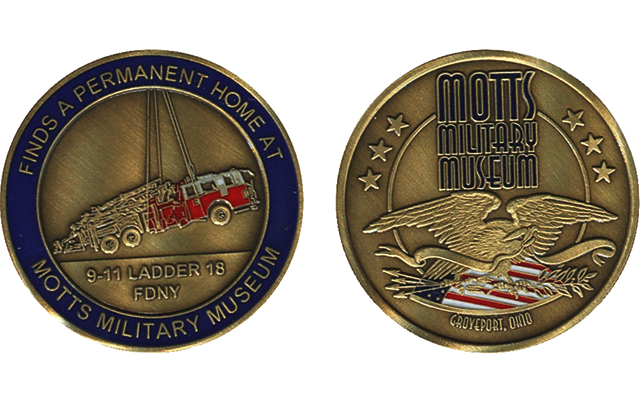 The Central Ohio Numismatic Association has produced a medal to support the Motts Military Museum’s exhibit of artifacts related to the Sept. 11, 2001, attacks at the World Trade Center and Pentagon.

The Central Ohio Numismatic Association has produced a medal to support the Motts Military Museum’s exhibit of artifacts related to the Sept. 11, 2001, attacks at the World Trade Center and Pentagon.

The museum, located in Groveport, Ohio, will include artifacts from the tragedy including NYC Fire Department Ladder 18, a 17-foot section of the antenna that stood atop the North Tower of the World Trade Center, marble slabs from the World Trade Center and two demolished police cars. All items are currently in storage while funds are raised for the museum.

Warren Motts, the Motts Military Museum’s director, said “When we’re finished we will have the biggest collection of 9-11 artifacts outside of Ground Zero in New York.”

CONA became involved in the project after Motts spoke to the group at its 2013 holiday banquet. The club commissioned SilverTowne to prepare an obverse die depicting the fire truck being pulled from the wreckage and a reverse die featuring the museum’s logo.

Club President Stephen E. Petty said, “CONA is proud to support this effort to memorialize the 9/11 tragedy by contributing to efforts to house a fire engine destroyed at Ground Zero in NYC.  Special thanks to club members Larry French, Chris Barlow and Gerry Tebben for their perseverance in helping make this metal a reality.”

The bronze medals feature an antique finish, with red, white and blue enameled highlights. A card promoting the club is inserted in the packaging. CONA also hopes that the medal will attract new collectors to the hobby and invites purchasers to visit CONA’s website to learn more about the club.