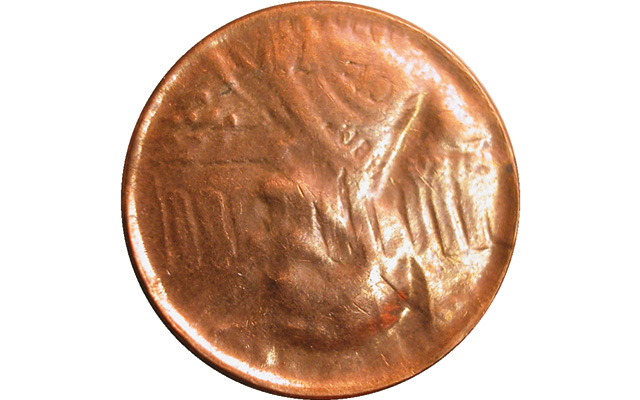 The obverse face of this undated cent features two brockages, one centered and one off-center. It represents a complex clashed cap strike in which the centered brockage is the secondary brockage. Images by Mike Diamond. 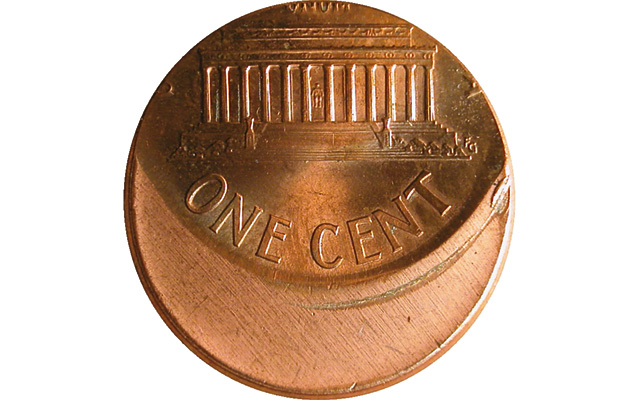 The reverse face of an off-center cent. If it were to receive a second strike that was centered and uniface, and if it then stuck to the obverse die, it would become the working face of a die cap responsible for producing a series of off-center brockages. 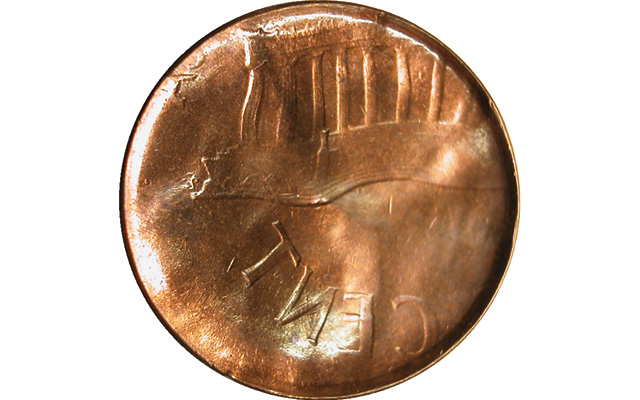 A capped die strike featuring an off-center, early-stage brockage. This brockage was generated by a die cap that was, in turn, derived from an off-center cent.

A “die cap” is strictly defined as a coin that sticks to a die and strikes at least one incoming planchet. The product of such a strike is called a capped die strike.

While most capped die strikes display a brockage, a counterbrockage, or nothing at all (in the case of a uniface die cap), the arrangement of design elements can be much more complex. Complex design patterns (raised, incuse, or both) are almost always produced by hammer die caps. This complexity is inevitable because any kind of defective planchet or error coin can stick to a die and become a die cap. Normal and abnormal coins can flip over before adhering to the die face. Multiple, overlapping coins and planchets can become compound die caps. Die caps can shift laterally or rotate, producing unusual effects.

Die caps can be modified after formation by being indented by planchets or brockaged by other coins. All this complexity can be compounded when a die cap collides with the opposite die, generating a fresh set of raised design elements on its working face. The planchets struck by such “clashed caps” are called clashed cap strikes, and these offer some of the greatest diagnostic challenges within the broader universe of capped die strikes. Several unusual clashed cap strikes have previously appeared in this column.

I recently came across yet another variation on the clashed cap theme on an undated, copper-alloy cent. The obverse face displays a centered, mid-stage brockage that consists of an expanded Lincoln Memorial and, below Lincoln’s bust, the bottom portion of several indistinct peripheral letters that occupy the position of the word STATES.

A second set of incuse, mirror-image letters appears on Lincoln’s shoulder; these are easiest to read if the obverse design is inverted. Running across the base of the bust we find the greatly expanded letters OF AM. Below these letters (i.e., higher on the bust) we find the letters IBUS (from PLURIBUS). These letters are off-center and rotated about 45 degrees clockwise from their expected position relative to Lincoln’s bust.

This second set of letters is also proportionally much larger than the centered brockage. This can only be the case if the two areas of raised design responsible for the two brockages formed at different times, with those elements responsible for the off-center brockage forming first. In other words, the off-center brockage is the original, or primary brockage. The younger, centered brockage was produced after the die cap clashed with the reverse die and is therefore a secondary brockage.

Five steps were necessary to create this unusual double brockage. The first step was the production of an off-center cent, like the one shown here. In Step 2, the off-center cent received a second strike while resting on top of a fresh planchet; both discs were centered during this strike. The double-struck cent on top then clung to the retracting obverse (hammer) die, ready for a new career as an obverse die cap. The bottom coin was ejected.

This die cap struck a series of cent planchets (Step 3), with early members of the group looking like the piece shown here. This undated cent features an early-stage brockage of the reverse design on the obverse face. The brockage is clearly off-center, even though the entire planchet was struck by the die cap. I’ve seen at least four other cents with this type of brockage.

In Step 4 the die cap clashed with the reverse (anvil) die when a planchet failed to be fed into the striking chamber. This event erased most of the original, raised, off-center reverse design and replaced it with a fresh, centered set of raised reverse design elements. The only portion of the original raised design to escape this fate were the letters lying in front of a relatively deep recess in the obverse die face corresponding to Lincoln’s shoulder. This portion of the die cap molded itself to the recess, leaving its raised letters below the plane of the die face and therefore protected from the clash.

The die cap — now a clashed cap — proceeded to strike a final series of planchets (Step 5), one of which is the coin under discussion. This coin was struck well after the clash and only after the secondary brockage had expanded significantly.

In closing, I should mention that there are other pathways that yield a full, off-center brockage. For example, an off-center coin can land squarely on an unstruck planchet, without sticking to the hammer die afterward. An early-stage die cap can come loose and shift laterally, with its working face generating an off-center incuse design, while its wall — crushed flat by the hammer die — covers the rest of the planchet. A coin can enter the striking chamber beneath a uniface die cap, and both can be struck into an underlying planchet. A careful study of physical characteristics can usually identify the particular scenario involved.