CCAC splits with CFA, Mint on reverses for generals coins 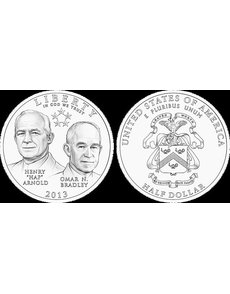 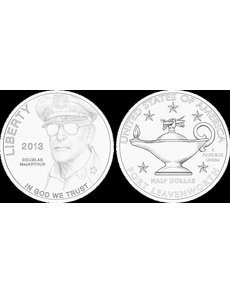 The Citizens Coinage Advisory Committee recommended these two designs for the gold $5 coin commemorating the nation’s five-star generals. The reverse was selected from those produced by the Mint for the half dollar. 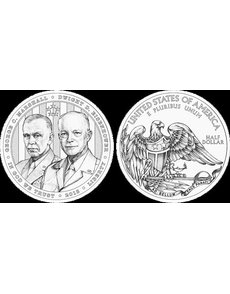 The CCAC split with the Commission of Fine Arts in recommending designs for the silver dollar in the Five-Star Generals commemorative coin program. Shown are the CCAC recommendations, which include a reverse that the Mint proposed for the half dollar.

When Treasury Secretary Timothy Geithner decides what designs to place on next year’s Five-Star Generals commemorative coins, he’s going to have to resolve the battle of the reverses.

That might be what the Citizens Coinage Advisory Committee set in motion June 26 when it reviewed the three-coin set for 2013 in Washington.

Not only did the panel differ with the Commission of Fine Arts on what should be on the obverses of two of the coins, it also suggested that all three commemorative coins needed to be more directly linked to the U.S. Army Command and General Staff College.

That is the military school at Fort Leavenworth, Kan., that all five of the World War II five-star generals attended. It is also the beneficiary of the surcharges that are to be placed on the three coins.

The U.S. Mint had decided that the gold $5 coin should feature Gen. Douglas MacArthur on the obverse and pay tribute to the World War II Pacific Theater of Operations on the reverse.

The silver dollar will honor Gens. Dwight D. Eisenhower and George C. Marshall on its obverse and the European Theater on its reverse.

The only tribute to the Army school in the Mint’s plan was to be on the reverse of the copper-nickel clad half dollar coin. It would honor Gens. Omar Bradley and Henry “Hap” Arnold on the obverse.

But the CCAC members said a strong “no” to that plan, voting to select all three reverses for the set from the seven reverse designs that the Mint had produced for the half dollar.

CCAC Chair Gary Marks led the fight, backing his argument with copies of the 2010 law that authorized the coins.

That law declared that the coins would be the first to honor the nation’s oldest military staff college, “which does not have a commemorative coin cast in celebrating its long and honorable history.”

That means, Marks said, that the coins are not just to honor the five generals, but the less well-known Army college.

His argument won strong support from Iowa National Guardsman Michael Olson, an coin collector and a graduate of the Army school. Olson, who has been a member of the CCAC since 2009, said he didn’t think the coins qualified as a set without a more direct tie among the three coins.

Michael Bugeja, an Iowa State University journalism director, agreed and added that “the reverse clearly has to show the college.” That idea carried by a 7 to 3 margin.

For the obverse of the MacArthur gold coin, the committee endorsed a design showing the general in his trademark sunglasses. Some members complained that none of the six obverse designs showed MacArthur with his equally famous corncob pipe.

The endorsed image drew 18 out of a possible 30 points in balloting that allowed each of the 10 committee members to assign up to three points to any design. Another image of the general in sunglasses drew 14 points, placing second in the voting.

The CFA’s endorsed design shows the hatted general’s head without sunglasses or the pipe next to a five-star ring.

For the reverse of the gold coin, the panel selected a design the Mint proposed for the copper-nickel clad half dollar reverse showing a lamp of learning with five stars. It drew 10 points (fewer than the number of votes eligible to be cast needed for formal endorsement under the panel’s rules), but was subsequently endorsed on a vote of 7 to 1 as the panel’s selection.

The CFA had recommended an image of a lone soldier storming a Pacific Island beach for the gold reverse.

For the silver dollar, the CCAC endorsed a design showing Marshall and Eisenhower in uniform against a striped background, a design favored by the foundation that supports the school. It drew 18 points and was followed by one showing the two men with military hats, which drew 10 points.

The CFA had endorsed a design showing twin portraits of the two generals without hats.

For the silver dollar reverse, the committee endorsed a half dollar reverse design showing an eagle with a shield , giving it 18 points.

For the copper-nickel clad half dollar, the CCAC gave 10 points to a design show Gens. Arnold and Bradley under a five-star ring.

It was the same design that the CFA endorsed, but the CCAC vote did not attract enough points to get the panel’s endorsement. A vote to endorse the design failed. While the panel’s report to the Treasury secretary will bear no endorsement for the half dollar obverse, the report will show the vote margin for the coin.

For the half dollar reverse, the panel endorsed with 15 points a design showing the crest of Fort Leavenworth. It was the same design that the CFA members had endorsed.

Although the Army Command and General Staff College Foundation had endorsed designs for the gold $5 coin and silver dollar reverses showing action in the Pacific and European theaters, its chief executive, Col. Robert R. Ulin, told the CCAC he was unaware that the foundation could be cited on all three of the reverses.

Ulin said he would favor such a change in the designs. “Here, here,” he was heard to exclaim as the panel debated the issue. ¦