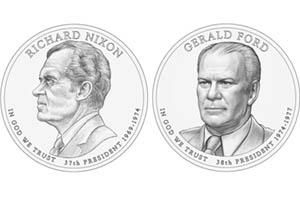 It became “all about the nose” when the CCAC recommended a side portrait of President Richard M. Nixon for a 2016 Presidential dollar. The proposed design, above right, for the 2016 Gerald R. Ford Presidential dollar, edged out two other designs to win the CCAC’s endorsement. 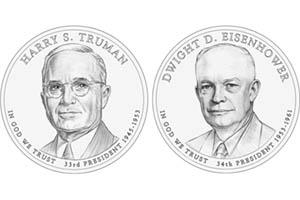 There was little disagreement among CCAC members in recommending the proposed designs, above, for 2015 Presidential dollars honoring Harry S. Truman and Dwight D. Eisenhower. 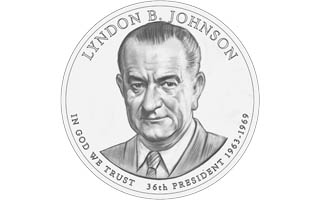 The panel endorsed a straightforward image of Lyndon B. Johnson. 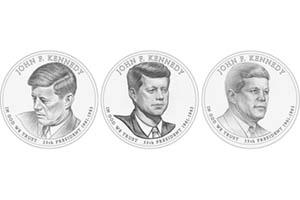 A proposed design, left, was recommended by the CCAC for the 2015 John F. Kennedy Presidential dollar over a design, center, that the panel considered looks too much like his brother Robert F. Kennedy, and right, that panel members thought made Kennedy look too fat. 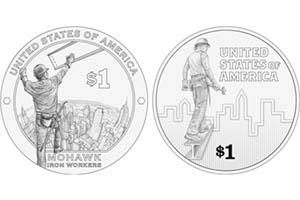 The CCAC’s recommendation for the reverse of the 2015 Native American dollar, above left, was selected from 20 proposed designs depicting Mohawk ironworkers who helped build many of New York City’s skyscrapers. The design received the CCAC’s final endorsement even though the design above right received more votes from the panel. 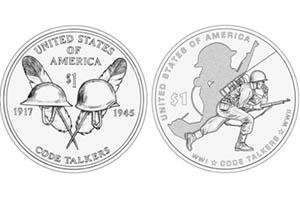 A crossed pair of eagle feathers behind a World War?I and a World War II helmet appear on the design, above left, that the CCAC endorsed for the 2016 Native American dollar recognizing Code Talkers. The design beat out the second-place design, above right, showing a charging WWII infantryman talking on his radio to the shadow of his WWI counterpart.

The Citizens Coinage Advisory Committee at its March 10 meeting found it was easier to select presidents for the nation’s coins than Native Americans.

During the first day of a two-day review of proposed coin and medal designs, the panel moved through images for six presidents much faster than it did for images of the American Indians who helped build Manhattan’s skyscrapers or saved U.S. forces in two wars.

Of course, it didn’t seem to hurt that the panel was stunned by the beauty of the Native American coin designs but less than thrilled by the images the Mint’s artists had created for the presidents whose dollar coins will be issued in 2015 and 2016.

The eight committee members present at the March 10 session at U.S. Mint headquarters in Washington, D.C., were so split over the proposed presidential images that they could not initially muster enough votes to formally endorse any of the images proposed for Richard M. Nixon or Gerald R. Ford for 2016 Presidential dollar coins.

After deadlocking over two Nixon designs, the panel voted to endorse a profile of Nixon after CCAC Chair Gary Marks endorsed the design. “It’s all about the nose,” said Marks. “This is the quintessential Nixon.”

Letting this Nixon design win “by a nose” would be a good thing, joked Erik Jansen in agreement.

“It is an unmistakable nose,” said Heidi Wastweet, a sculptor member on the CCAC panel.

The panel backed the Nixon profile by a 6-to-1 vote.

For the Ford design, the panel was split between three designs, with none securing enough votes for an endorsement. The panel agreed to endorse a design that had secured the most points by a 6-to-0 vote.

In contrast, the eight CCAC members had no trouble selecting a favorite image of Harry S. Truman from five proposed images.

They rejected the four other images immediately and the straight ahead image of the bespectacled 33rd president drew 24 points. That’s the maximum allowed under their voting system.

Dwight D. Eisenhower was also an easy recommendation for the committee. A head-on portrait of the 34th president drew 21 points and carries the committee’s endorsement over three other images.

The question of John F. Kennedy’s image was more controversial.

Five images were submitted. The panel found one too youthful, looking like Robert F. Kennedy, the president’s brother, and said another makes him look too fat.

Panel members finally threw their support to a design showing a somewhat downcast president after being reminded that the image is patterned after the official Kennedy portrait by Aaron Shikler in the White House.

“I’m touched by this,” Wastweet said, adding that not all presidential images have to “heroic.”

The recommended portrait drew 16 points in the balloting to earn the CCAC’s endorsement.

For Lyndon B. Johnson, the Mint produced six designs.

The panel endorsed a straightforward image of the 36th president, saying the proposed design portrays him as the Washington deal maker he is reputed to have been.

The presidential images will be shown March 20 to the Commission of Fine Arts. The CFA’s recommendations along with those of the CCAC will then be presented to Treasury Secretary Jacob J. Lew, who has the final say on coin and medal designs.

The committee’s anguish over the six Presidential dollars contrasted with what Jansen said was the “just flat out fun” of selecting reverses for the 2015 and 2016 Native American dollars that will carry the image of Sacagawea on the obverse.

What almost every member of the panel praised extensively are the 20 images proposed for the 2015 coin of the Mohawk ironworkers who built many of New York City’s tallest buildings.

“Kudos to the artists,” said Marks, citing the “bold, crisp” images. “I like them all.”

In their initial balloting, the CCAC gave 19 points to a design showing a Native American ironworker walking across a steel beam into a stylistic skylight of high-rise buildings.

But that gave that design only a one-point edge over another design that shows a Native American worker above the New York skyline grabbing a steel beam with one hand and holding onto a circular part of the coin design with the other hand.

Saying he was likely to be “going down in flames,” Marks pleaded with the panel to reverse the call, arguing that the lower-rated design is actually the better.

U.S. Mint Sculptor-Engraver Donald Everhart II, who sits with the CCAC as an adviser, agreed. “I think 13 is a much nicer design,” he said.

The committee agreed by a vote of 6-to-2 to endorse the lower-rated design, which carries the lettering “Mohawk ironworks.” The panel had agreed the inscription needed to go on the previously favored design.

Michael Olson, an Iowa collector who was attending his final CCAC meeting, spoke for many on the panel when he said it is “a real shame” that the Native American dollars do not truly circulate. The designs for these coins, he said, are excellent and would be greatly appreciated by the public.

The committee was equally delighted by the proposed designs for that coin.

The CCAC endorsed a design that shows a crossed pair of eagle feathers behind World War I and World War II helmets. The design drew 19 of a maximum 24 points in the balloting.

A design showing a charging World War II infantryman talking on his radio to the shadow of his World War I counterpart drew 14 points to come in second.

The committee voted to remove the dates 1917 and 1945 from the two helmet design, replacing them with “WWI” and “WWII.” The words “Code Talkers” appears under the helmets and “United States of America” above them.