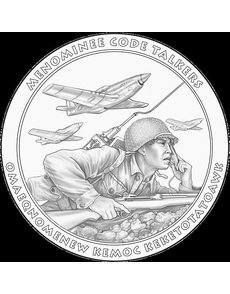 The CCAC recommends these two designs for a World War II Code Talker medal for the Menominee Tribe of Wisconsin.

The Citizens Coinage Advisory Committee has given a resounding thumbs-down to the U.S. Mint’s plans to reissue classic coin designs on some of its high-priced platinum Proof and bullion coins.

During an Oct. 18 telephone meeting, the panel urged the Mint to give its artists a free hand to offer more modern designs for coin series whose sales have fallen sharply in recent years.

“My message is, ‘Let’s do something modern, something new,’ ” said CCAC Chair Gary Marks.

“I really think you need to go back to the drawing board on this one,” said Michael Moran, who described himself as a big fan of classic coins.

Moran and the other nine CCAC members on the telephone call were virtually unanimous that returning to classic designs for U.S. coins would be a step backward and away from the committee’s repeated calls for more contemporary designs.

If anything, several committee members look to some of the recently rejected coin designs for a new series, saying designs that did not work well for particular coins might go well in the higher-priced platinum and gold series.

What triggered the discussion was a request from the Mint for help devising a new theme for the reverses of the American Eagle platinum program.

Since 2009 the reverses have featured the six principles of the Preamble of the U.S. Constitution. That series will end next year with a design that illustrates Securing the Blessing of Liberty.

That prompted a Mint Sales and Marketing briefing paper’s suggestion that the Mint should “launch a new multi-year series featuring classic Eagle designs on the reverse.”

For 2017, the 20th anniversary of the American Eagle platinum coin program, the Mint was proposing “the classic Augustus St. Gaudens $20 gold piece obverse and reverse designs in platinum proof.”

Several members of the committee challenged the idea of retaining the same obverse and said that was a question the Mint should have put to its customers.

Marks noted that the CCAC has consistently argued for more contemporary designs. The suggestions that classic designs will sell well “gets tired and stale,” he said.

“I really think this direction is wrongheaded,” he said.

Michael Olson, an Iowa collector, said placing classic designs on one side of a modern coin produces a “disjointed coin that makes no sense.”

“We need some fresh designs and ideas,” he argued.

Heidi Wastweet, a Seattle sculptor who has worked with private mints, worried the U.S. Mint might attempt “replica” coins for some of the classic coins instead of using the actual dies for those coins.

She was one of the committee members urging Mint officials to look in the agency’s archives. There is wonderful potential there from the Mint’s own artists and the Mint should “make them the rock stars,” she said.

When Jack A. Szczerban, branch chief of the U.S. Mint’s Precious Metals Group, questioned whether the coin designs needed an overall theme, Wastweet said, “No.”

“The artists would be delighted to be free,” she said.

Jeanne Stevens-Sollman, a Pennsylvania artist who has served on international coin design panels, told the committee she find U.S. coins are “not on the edge.”

And she said she feared the Mint’s plan would be “digging ourselves back into a hole.”

“We have to jump off the board and go swimming,” she said.

The Mint had sought the committee’s ideas on where it should take the platinum program. Marks said he expected the question would be re-examined at a future meeting.

In its only other action during a two-hour meeting, the CCAC gave its unanimous endorsement to the latest Code Talker Medal designs.

The committee endorsed designs approved by officials from the Menominee Tribe of Wisconsin for the World War II code talkers it sent into combat.

The endorsed obverse features an infantryman with a rifle in one hand and a radio-telephone in the other as three fighter planes pass overhead.

The recommended reverse features the tribal Thunderbird symbol surrounded by the symbols of its six clans and sprigs of rice.

The committee recommended that the placement of a canteen and the hands of the infantryman on the radio device be re-examined.

The design will also be reviewed by the Commission of Fine Arts before it goes to the Treasury secretary for final say on how the medal should appear.

The commission was scheduled to have considered the medal at its Oct. 17 meeting, but that meeting was delayed until November because of the government shutdown. ¦