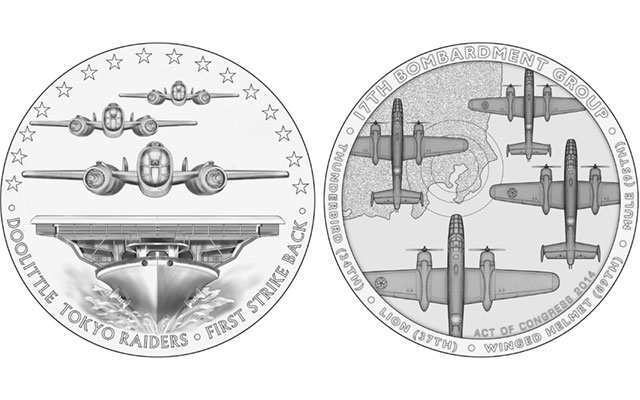 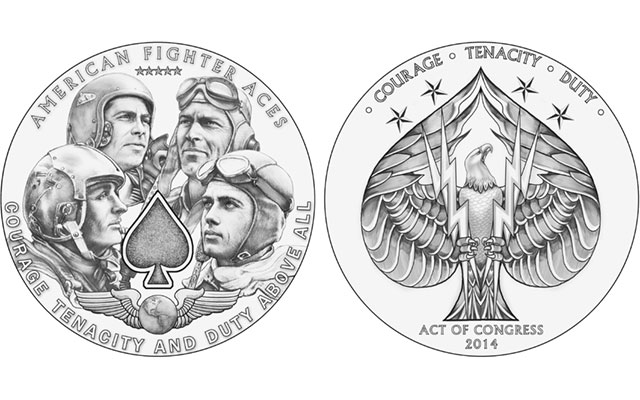 The above designs received approval Oct. 14 from the Citizens Coinage Advisory Committee for the American Fighter Aces congressional gold medal.

Urged by its chair to seek out designs that are symbolic rather than realistic, the Citizens Coinage Advisory Committee did just that at its Oct. 14 meeting in Washington, D.C.

Although the committee did not go as far as its chair, Gary Marks, had urged, it did back designs that were more symbolic than the ones sponsoring groups had sought for congressional medals honoring the Doolittle Tokyo Raiders from World War II and the nation's American Fighter Aces during four wars.

For the obverse of their medal, the Doolittle Tokyo Raiders had sought a design showing the aircraft carrier USS Hornet launching one of the 16 Army B-25 bombers that participated in the first U.S. strike against mainland Japan in World War II.

The committee instead endorsed a design that focuses on three bombers headed directly ahead off the carrier's flight deck.

"All I can think is uh-oh. It is as if they were going at me," said CCAC member Mary N. Lannin, who joined the meeting by telephone from Europe.

For the reverse, the panel urged a design showing four bombers flying over an outline of Tokyo. This design received 20 out of a possible 24 points under a voting system that allows each committee member participating to assign up to three points to any design. With eight members voting at the meeting, that meant the maximum any design could receive was 24 points.

The committee tied over a motion to reject its choice for the reverse in favor of a purely symbolic design favored by Marks that showed a seahorse, representing the Navy ship, and an eagle, representing the bombers, attacking with bolts of lighting.

The committee also voted to place the date of the raid — April 18, 1942 — on the obverse and move the language "First Strike Back" to the medal's reverse.

For the obverse of a medal honoring fighter aces from World Wars I and II, Korea and Vietnam, the panel accepted one of the two obverse designs endorsed by the American Fighter Aces Association.

The design shows the faces of four aviators from the wars around an ace symbol.

The committee also voted to recommend removing the ace symbol and the lettering "Courage, Tenacity and Duty Above All."

The reverse of the medal would contain a large ace symbol formed by an eagle, under the panel's recommendation.

The CCAC recommends that the four stars on the reverse design also be removed because of confusion over the four wars being honored and the requirement that a fighter ace must have destroyed five enemy aircraft in combat.

In the balloting for the American Fighter Aces medal, the CCAC-recommended obverse design drew 14 points while the top reverse, the ace-shaped eagle, drew 15 points.

The Commission of Fine Arts is to review the medals on Oct. 16.

The secretary of the Treasury will have the final word on which designs are selected for the medals.

The CCAC also discussed plans for coins to honor humorist Mark Twain in 2016 with gold and silver commemorative coins and another congressional gold medal honor the Monuments Men who helped save art and historic monuments captured by the Nazi during World War II.

When discussing Twain, Marks expressed delight at the prospect of putting one of the humorist's quotes on a coin.

"The lack of money is the root of all evil" is the quote that Marks laughed would be quite interesting on a coin.