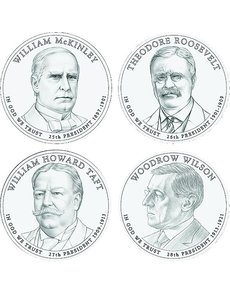 The Citizens Coinage Advisory Committee has reaffirmed its support for frontal images on the Presidential dollar series.

Concerned that the Commission of Fine Arts, the other federal coin review panel, is now favoring profiles for the series, CCAC members pointedly recommended frontal portraits for three of the four dollars to be issued in 2013, whereas the CFA recommended three profile designs and one frontal portrait.

At its Sept. 27 meeting in Washington, the CCAC approved one of the four designs the CFA had endorsed for the 2013 coins — a profile portrait of Woodrow Wilson — but it did so by a narrow margin, also giving strong support to frontal images of Wilson. On their other recommendations, the CCAC members appeared to be united against profiles.

Erik N. Jansen, a lifelong coin collector from Washington state, summed up the committee’s rejection of profiles as it debated designs for the Theodore Roosevelt coin. “To treat Roosevelt in profile is to deny him the right to look you in the eye, which he always did.”

With that caution the members of the panel solidly rejected a Roosevelt profile endorsed by the CFA, arguing that the nation’s 26th president needs to be looking squarely at the American public on his coin.

The committee gave 25 of a possible 27 points to forward-facing bespectacled Roosevelt bypassing the profile that the CFA had endorsed.

Besides, New Jersey collector Donald Scarinci said, the Presidential dollars are going to be collected as a set and coins in it should resemble each other. Of the 19 coins issued since the series began in 2007, only Andrew Jackson and Rutherford B. Hayes are depicted in profile.

“These coins are not issued in isolation. They are in a series and they will be collected in sets,” Scarinci said.

“We’re now seeing the ending of this series and we should be consistent with what we’ve done previously.”

CCAC Chairperson Gary Marks noted during the Sept. 27 meeting that the CFA had been unanimous in its votes at its Sept. 15 meeting and that the CCAC also would have to have a strong stance if it were to get Treasury Secretary Timothy F. Geithner to back its recommendations instead of the commission’s.

Marks’ comments were significant because they indicate how closely the two review panels are now checking on the positions of the other body.

At the Sept. 27 session the CCAC did give strong support to a profile portrait of Wilson, the 26th president, recommending the same design selected by the CFA. But that was closely followed by 15 points each to two forward-looking images of Wilson.

President William McKinley had been endorsed in profile by CFA, but CCAC members awarded 24 points to a design that shows a forward-looking, somber president.

For William Howard Taft, the panel backed a forward-looking image of the 27th president. For Taft the CFA had also endorsed a frontal image from the Mint’s 11 designs. The CFA choice for Taft drew only 10 points in the CCAC voting.

Scarinci sided with the CFA on Taft. “The CFA is right on the money with this one. Taft was a big guy and this captures him.”

“Big Bill Taft has to be big,” agreed historian Michael A. Ross from the University of Maryland. But he argued that the CFA’s choice is “not Taft.”

The CCAC’s backing of the Roosevelt design was not without controversy. Several members called the 11 designs proposed by the Mint flat and complained all failed to capture the zest with which he ruled as president.

But Marks persuaded the committee not to press for new designs, expressing concerns that such a request might not be productive.

The panel had strong supporters for the endorsed design. “Don’t overthink this one,” Jansen said, who called the selected design “by far my favorite.”

“I think number 1 [the selected design] is the only one to go with in the spirit of the series,” Scarinci said. “There is no other choice.”

Ross was not overwhelmed by the Roosevelt designs. “Rutherford B. Hayes does not need to come to life [on the coin],” he told the committee. “But Teddy Roosevelt does.” He was “the one president you can’t have flat,” he said.

After the votes on the four coins concluded, the committee turned to its recommendations for new noncirculating commemorative coins in its next annual report.

The committee tentatively agreed to add the 13th Amendment as a possible coin subject in 2015.

It also added the 150th anniversaries for the Transatlantic Cable and the founding of the American Society for the Prevention of Cruelty to Animals to suggestions for 2016.

Ross repeatedly plugged the ASPCA coins saying the “cuddly animals” that could be depicted on the coins would open “new markets” to the Mint. ¦