CCAC takes a look a designs for gold Kennedy half 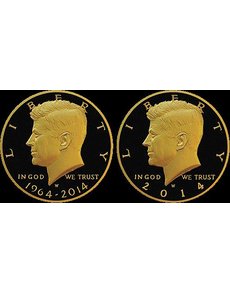 Although Citizens Coinage Advisory Committee members did not agree Feb. 11 on markings for a proposed Kennedy half dollar in .9999 fine gold, they strongly praised the U.S. Mint for initiating the gold coin proposal.

The gold coin would commemorate the 50th anniversary of the assassinated president’s appearance on the half dollar.

U.S. Mint officials say they are still considering whether the proposed gold Kennedy half dollar would be a 1-ounce gold coin, or whether the date would be presented as 2014 or as 1964-2014, or if a Proof version would carry the W Mint mark from the West Point Mint on the obverse or the reverse.

U.S. Mint spokesman Michael White said Feb. 12 that the exact reverse design has not yet been decided.

CCAC members were divided on other markings as well.

Gary Marks, the CCAC chair and a half dollar specialist, did not like the idea of multiple years on the coin, but Pennsylvania artist Jeanne Stevens-Sollman did.

“Whatever you make, you’re going to sell a lot these both at the high end and the low end,” said Michael Olson, an Iowa collector.

Donald Scarinci, a New Jersey lawyer and medals specialist, urged the Mint to “err on the side of making it less expensive.”

A 1-ounce gold coin could easily cost between $1,200 and $1,300 a coin based on the recent price of gold, making it expensive for many collectors, some CCAC members said.

Michael Moran, another collector on the panel, said, “It’s going to sell well however you do it.”

Mint officials plan to use the Kennedy half dollar’s original obverse design, which was created by U.S. Mint Chief Engraver Gilroy Roberts for a medal and adapted for coin use.

U.S. Mint officials stated during the CCAC meeting that Roberts’ original plaster model for the coin’s obverse has not been located.

U.S. Mint spokesman Michael White, responding by email Feb. 12 to Coin World’s questions, said: “We located the galvano from 1964 and scanned that to capture the detail. We then located the 1964 master tooling and scanned that to determine heights of relief, basin curvature, and aspect ratio of the effigy. The galvano scan was then digitally modified to reduce height of relief and aspect ratio, while being true to the 1964 sculpt (galvano). The final digital sculpt was placed on the basin, lettering added, and tooling generated for testing.

“The obverse was kept to the original sculpt in every way possible. Slight tweaking may be needed for coin-ability issues based on the alloy being struck (gold, silver, clad).” The U.S. Mint is also contemplating multicoin Kennedy half dollar sets with coins struck in .900 fine silver and copper-nickel clad and in different finishes.

According to White, a galvano was used in earlier stages of the U.S. Mint’s manufacturing process.

“In essence, a clay/wax sculpt was created for the coin or medal in a much larger size (8 inches or more in diameter),” White said. “This sculpt was in the orientation of the coin/medal. A plaster mold or negative was then created from this sculpt and summarily used in an electroforming process. The process could take several days to complete before a copper galvano would be ready.

“The galvano side that was against the plaster mold was smooth and refined. The back side of the galvano was very rough. The galvano was later used on the Janvier transfer engraving machines of the day to make the final dies.

“So in essence, a galvano was a large electroformed model of the coin/medal and was used on the transfer engraving machines of the day (Janvier) to make dies.”

The Janvier machine traced the design elements of the galvano with a stylus, reducing them in size through a series of gears, and cut an exact replica into the blank face of a piece of die steel to create a master hub. This hub was used to make the master die, which was used to make multiple working hubs. Each working hub made multiple working dies.

The U.S. Mint no longer uses the Janvier reduction-engraving lathe in its die production processes.