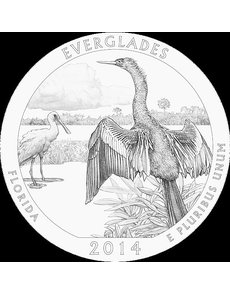 The Citizens Coinage Advisory Committee recommends this design for the 2014 Florida quarter dollar. 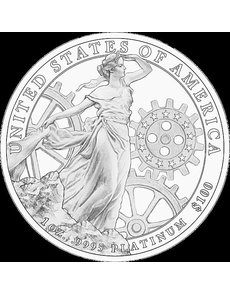 For the Proof 2013 American Eagle platinum coin, the CCAC recommended a design showing an image of a goddess-like “Young America” contemplating the balance of power between the state and federal governments. 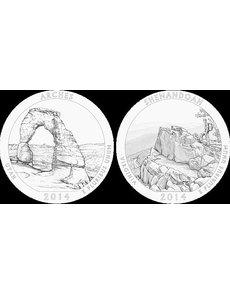 The Citizens Coinage Advisory Committee recommended designs for just three 2014 America the Beautiful quarter dollars, including for Utah and Virginia, shown above, and for Florida, shown on page 1. It asked the Mint to provide new designs for the Tennessee and Colorado coins. 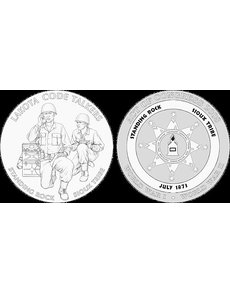 The CCAC recommended these designs for a congressional medal honoring code talkers from the Standing Rock Sioux Tribe in the Dakotas.

With several U.S. Mint artists watching via closed circuit television, members of the Citizens Coinage Advisory Committee lambasted some of their proposed designs for the 2014 America the Beautiful quarter dollars, saying they had produced “post cards,” not art.

In one of its most critical sessions on coin design, the panel rejected the reverse designs for two of the quarter dollars, telling the Mint it needed better images for both the Smoky Mountains and Great Sand Dunes national parks quarters.

The committee endorsed designs for the Arches, Everglades and Shenandoah national parks quarter dollars, albeit with little enthusiasm.

The panel’s Nov. 27 meeting could have been titled “Coin Design 101” as members of the panel repeatedly lectured the artists and Mint officials over what they called poor coin designs.

What seemed to anger the committee most was a tendency to cram too much art on the small pallet of the quarter dollar.

“The problem is we’re getting post cards,” complained Michael Bugeja, an Iowa State University journalism professor and a former National Endowment for the Arts fellow. “We’re getting drawings rather than art,” he said.

CCAC Chair Gary B. Marks opened the meeting with a discussion of several recent coins he said had been design failures.

The reason, Marks said, was because they were filled with “so much scenery and background” that the coins’ central figures, often animals, become lost.

Better were the designs in the State quarter dollars program for the 2007 Montana coin (a bison skull), a design Marks conceded he had opposed, and Crater Lake on the 2005 Oregon quarter, he said.

It’s a matter of “more balance between the images and negative space,” Marks said.

The chair’s remarks and those of his committee members echoed the frequent complaints from the Commission of Fine Arts whose members frequently have told the Mint the same thing. Drop the lavish backgrounds and concentrate on the central figure on the coins, they have said.

It wasn’t immediately clear how the Mint will react to the committee’s challenges. In the past the Mint has sought to placate the two review panels with additional designs.

Such decisions would typically go to the Mint’s director. But the agency has been under an acting director for a year and the Senate had yet to act on President Obama’s nomination of Bibiana Boerio to head the agency.

In this case, several members of the CCAC told Coin World they feared the Mint was paying close attention to the wishes of the park superintendents who were advising on what should appear on their park’s coins.

Virginia’s Shenandoah National Park, for example, had five designs, all of which featured views of Little Stony Man Mountain. Three appeared based on the same photograph and one showed a lack of perspective on the Blue Ridge Parkway, which runs through the park.

None of the four designs offered for the coins commemorating Smoky Mountains Park in Tennessee or the seven sketches for the Sand Dunes Park in Colorado were able to win at least the required 16 points from the committee’s 10 members to win an endorsement.

Each member is allowed to give a design up to three points under the panel’s voting scheme. To win, a design must get more than half of the possible 30 points

Only one of the Smoky Mountains designs, one featuring a bear and her cub, drew 13 votes. A view of a cabin, favored by the Commission of Fine Arts and the park, drew 11.

Virginia’s Shenandoah National Park narrowly won approval of a design showing a hiker atop Little Stony Man Mountain. It secured 17 points, one more than required, after the panel sharply criticized the designs.

The CCAC voted to urge a tree be removed from the recommended design and that hazy mountains be removed, as well as asking that the hiker’s size be reconfirmed (a similar scene reviewed by the panel shows a smaller hiker). The CFA had recommended the same design.

For Arches National Park in Utah, a park that contains a large number of limestone arches, the CCAC strongly favored a design showing Delicate Arch.

This is the same iconic image featured on postage stamps and the Utah state license. It secured 28 of the possible 30 points, an endorsement that carried no qualifications.

The Everglades National Park in Florida also produced a winning design showing an anhinga bird with outstretched wings. Like the CFA, which picked the same design, the CCAC urged that clouds be removed from the background along with some of the foliage.

For the Great Sand Dunes National Park and Preserve coins, the CCAC had no easy solution. The most any design drew was nine points for an image of a hiker crossing a dune.

The committee urged more and simpler designs for the Sand Dunes Park coin, as it sought for the Smoky Mountains coins. The CFA had backed another design that sought to show the various ecosystems in the Colorado park.

“This one is really challenging,” said Marks, who declined to recommend any of the seven reverses. He complained that the design attempted to show people who would “shrink to ant size or less” on the coins.

The CCAC was more welcoming of the nine designs the Mint had produced for the reverse of the Proof 2013 American Eagle platinum coin.

It recommended a design showing an image of a goddess-like “Young America” contemplating the balance of power between the state and federal governments as illustrated by a series of gears.

Marks predicted that coin, one of the most expensive to be issued by the Mint, would be “absolutely gorgeous.”

“You’ve really got it here ... a coin that is truly American,” he said.

The committee gave it 28 of 30 possible points for another strong endorsement.

The CFA had recommended another design featuring “Young America” for the coin. That panel urged a circle of stars and a land mass be removed from the design.

For a congressional gold medal to honor code talkers from the Standing Rock Sioux Tribe in the Dakotas, the CCAC narrowly accepted the tribe’s recommended design for the obverse, a design featuring two code talkers.

A tribal seal was recommended for the reverse.

All the design recommendations from the CFA and CCAC will go to Treasury Secretary Timothy Geithner who has the final world on what designs can be placed on both the coins and medals. ¦