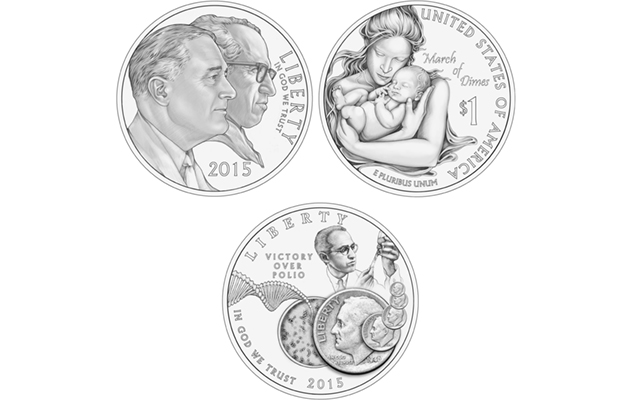 The proposed design being recommended by the Citizens Coinage Advisory Committee for the obverse of the 2015 March of Dimes commemorative silver dollar is not the original top vote-getter among the designs reviewed May 19 in Philadelphia.

The design being recommended depicts jugate portraits facing right of President Franklin D. Roosevelt and Dr. Jonas Salk. The design received the CCAC’s final recommendation after a second round of balloting was conducted among the top two design contenders.

The design receiving the highest number of votes during the initial voting, and one more than the second-place finisher eventually given the nod, features Dr. Jonas Salk extracting the anti-poliomyelitis vaccine, as well as showing the double RNA helix and several 1946 Roosevelt dimes.

The CCAC’s recommended reverse design was inspired by the many success stories of the March of Dimes and is symbolic of a mother’s love.

Dr. Salk discovered and developed the first successful inactivated polio vaccine, which was introduced in 1957.

Before an in-depth design review began, CCAC Chairman Gary Marks withdrew designs from consideration if no interest was shown in them by CCAC members during a roll call of the individual designs.

Following the discussion by each of the 10 members present on their individual design preferences among the remaining designs, CCAC members were able to rank their choices based on the panel's voting system.

The design incorporating the Roosevelt dimes received 19 votes and the conjoined profiles of Roosevelt and Salk received 18. None of the other obverse designs being considered received sufficient votes to be reconsidered. A revote gave the nod to the Roosevelt-Salk design.

CCAC member Michael Bugeja had expressed his concerns that incorporating renditions of one or more Roosevelt dimes within a design would repeat the mandated mottoes. CCAC member Thomas, who is president of the Pennsylvania Association of Numismatists, suggested that the design bearing the jugate profiles of Roosevelt and Salk would have a better chance for the coin to sell out.

The enabling legislation, Public Law 112-209, authorizes the production and release combined in Proof and Uncirculated versions of 500,000 coins, each to include a $10 surcharge. Net surcharges, after the U.S. Mint recoups its production and distribution costs, are to be paid to the March of Dimes to help finance research, education and services aimed at improving the health of women, infants and children.

The Treasury secretary is also authorized to make bulk discounts of the coins available.

Coin World will continue to publish updates as they become available.