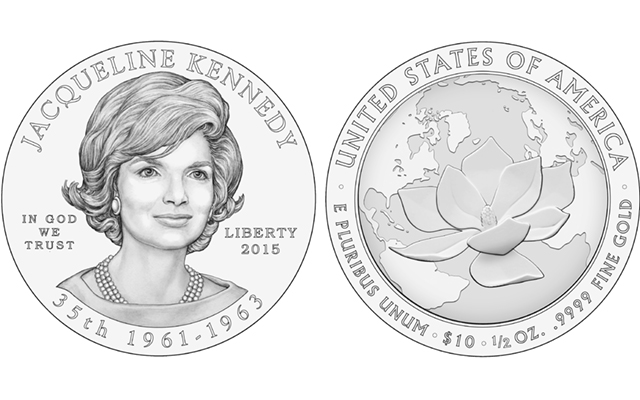 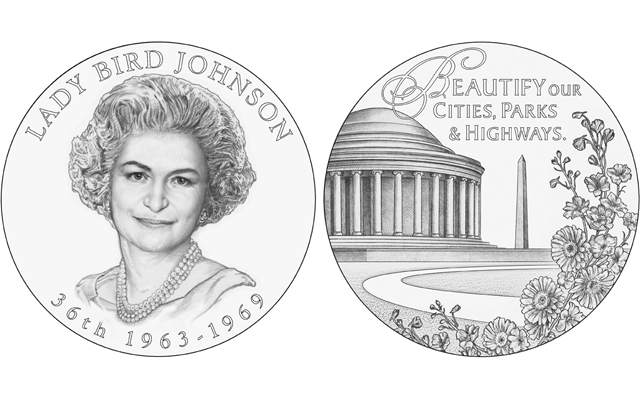 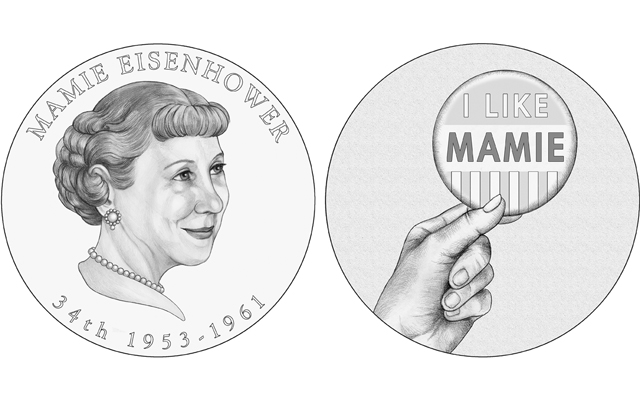 The recommended obverse for the 2015 Mamie Eisenhower First Spouse gold coins is the only one of five submitted designs to receive CCAC consideration. 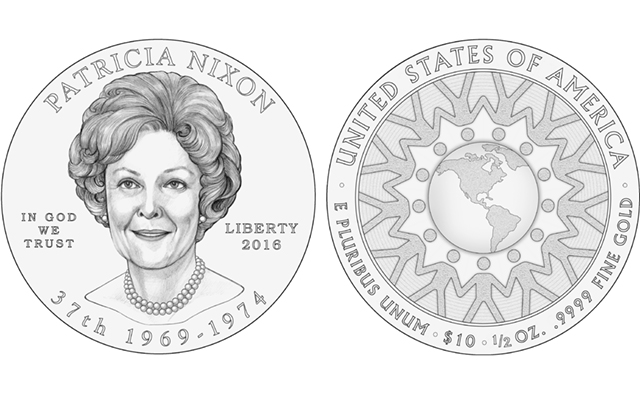 The recommended obverse Pat Nixon depicts her with what CCAC members called a “forced” smile. The reverse symbolizes Mrs. Nixon’s efforts to emphasize the value of the average American citizen during her years as first lady. 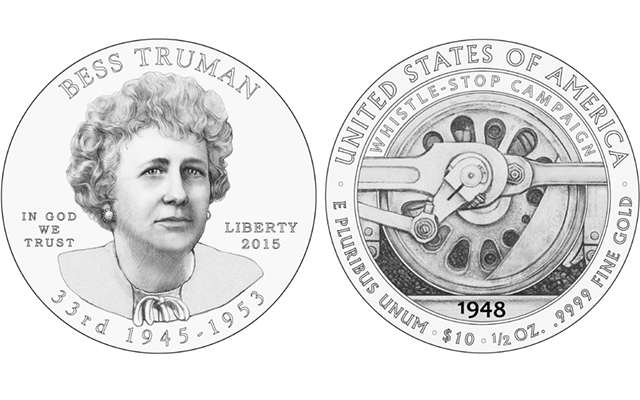 These are the designs recommended by the CCAC for the Bess Truman First Spouse gold coins to be issued in 2015. 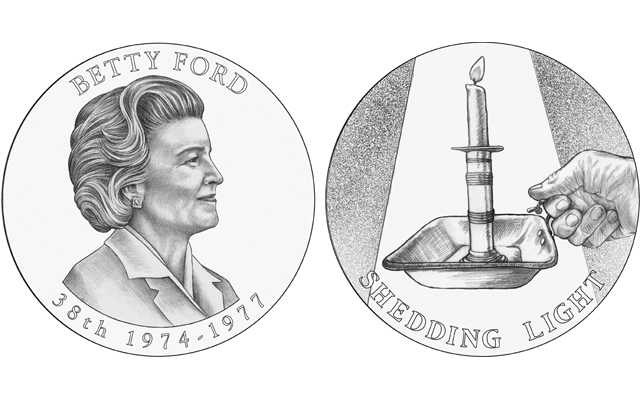 The reverse design recommended for the Betty Ford coins for 2016 depicts a young woman climbing upward, symbolizing Mrs. Ford’s legacy of inspiring others to achieve victory from addiction through her example of openness and personal victory.

Proposed designs for the obverses and reverses of the remaining six First Spouse gold $10 coins were recommended by the Citizens Coinage Advisory Committee on Sept. 23.

For 2016, First Spouse designs were recommended for Patricia Nixon and Elizabeth "Betty" Ford.

The designs given final approval by the Treasury secretary will appear not only on the Proof and Uncirculated gold $10 coins, but also on the companion bronze medals sans the coin inscriptions.

Before each member rendered an opinions on individual designs for consideration, CCAC Chairman Gary Marks polled the 11-member panel, including himself, on which designs they wanted to evaluate. The number of obverse and reverse designs originally submitted for consideration were pared down for each First Spouse through this process.

The obverse eventually recommended depicting Mamie Eisenhower was the only design considered for that side of the Eisenhower coin.

The recommended obverse depicts a portrait of Bess Truman, her head turned slightly to her left. CCAC member Michael Moran said the rendition is very close in appearance to an autographed photo of the first lady that was handed out by the White House. The image of Mrs. Truman in the autographed photo is one Mrs. Truman preferred, Moran said.

The recommended reverse depicts a wheel of a train, reflective of the 22,000 miles Mrs. Truman traveled during the whistle-stop campaign in President Truman’s successful 1948 election bid.

The CCAC unanimously endorsed the recommended obverse portrait, since it was the only obverse design from five submitted that the CCAC members chose to consider.

The CCAC’s recommendation for the reverse depicts the clasped hands of Mamie and Dwight Eisenhower, a globe, five stars and a DC-54 aircraft. Mrs. Eisenhower traveled around the world with her five-star general husband.

The DC-54 was a common military transport plane, and was in operation as Air Force One while the Eisenhowers were in the White House.

CCAC member Donald Scarinci, a medallic art specialist who has spent the past 10 years on the advisory panel, said Jacqueline Kennedy is probably one of the most photographed first ladies.

The consensus of CCAC members was that the recommended obverse captures how each member recalls her as first lady.

The proposed reverse designs sparked some debate. While Mrs. Kennedy was noted for her advocacy of music, theater and the visual arts, some CCAC members said the design representing the arts looked like clip art, almost “cartoonish.” That rejected design depicted the masks of comedy and tragedy, musical notes and treble clef, and an artist’s palette and brushes.

What grabbed the attention of the CCAC was the eventually recommended design, reflecting her diplomatic travels and White House beautification efforts.

The recommended design depicts the saucer magnolia, a flower Mrs. Kennedy selected for planting in the White House Garden and also at the Eternal Flame in Arlington National Cemetery, which would become the final resting place for President and Mrs. Kennedy.

The flower’s petal tips reach toward points on the globe, including Washington, D.C., and some of her most notable diplomatic destinations — Colombia, Venezuela, Morocco, Italy Greece, Paris, and London.

The biggest discussion concerning the Lady Bird Johnson proposed obverse designs concerned the hairstyles depicted and whether they reflected how Mrs. Johnson looked as first lady.

After the CCAC employed its established voting procedures to select a design for recommendation, none of the five obverse designs considered received enough votes to establish a clear majority.

Each CCAC member present rates the designs under consideration by assigning 0 to 3 points to each design. With all 11 members present, the maximum number of points any design could receive was 33 points, with 17 points needed for recommendation.

The recommended reverse design reflects Mrs. Johnson’s efforts in the conservation and beautification of America.

The design depicts the Washington Monument and Jefferson Memorial with an arrangement of flowers to the right.

The design is inscribed BEAUTIFY OUR / CITIES, PARKS / & HIGHWAYS.

The recommended obverse for Patricia Nixon depicts the first lady with a smile that more than one CCAC member considered to be “forced.”

The recommended reverse features figures standing hand-in-hand around a globe, symbolizing Mrs. Nixon’s efforts to emphasize the value of the average American citizen during her years as first lady.

Mrs. Nixon advocated volunteerism domestically and internationally. She also took strides to make the White House accessible to everyone.

More than one CCAC member recommended there be additional spacing between the head of each figure and the globe.

The recommended obverse depicts a left-facing portrait of Betty Ford.

CCAC members unanimously endorsed the recommended reverse depicting a young woman ascending a spiral staircase. The design symbolizes Mrs. Ford’s legacy of inspiring others to achieve victory from addiction through her example of openness and personal victory.

The CCAC recommendations and those of the Commission of Fine Arts will be forwarded to the Treasury secretary for final approval.