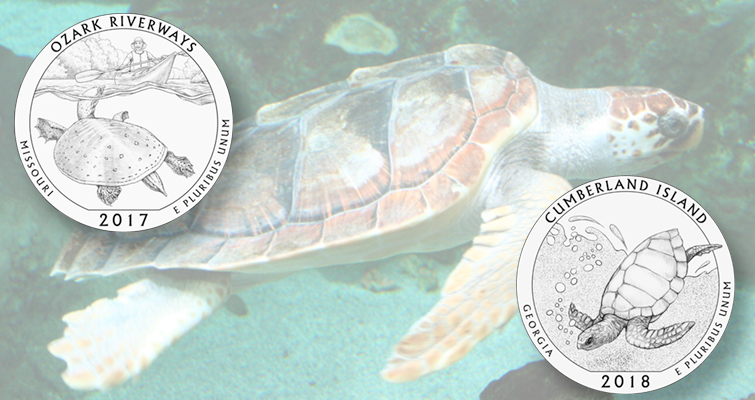 Two turtle designs considered for 2017 and 2018 America the Beautiful quarter dollars drew rave reviews from the CCAC but not from the CFA. As someone once said, "all the turtles are free...," and this collector would love to see a U.S. turtle coin!

Bob Carr got back into coin collecting a few years ago after “taking a few decades off” from the hobby. He is pres­ident of the Northside Coin Club and the former newsletter editor of the Front Range Coin Club, both in Colorado.

Turtle designs were the overwhelming favor­ite coin design by the Citizens Coinage Advisory Committee for the America the Beautiful quarter dollars each of the past two years.

The process of a coin getting approval for issue can be a lengthy one. When new designs are being considered, the U.S. Mint’s engraving staff, along with outside artists in the Artistic Infusion Program, produce proposed designs which the Mint submits to both the CCAC and the Commission of Fine Arts. Each coin advisory panel makes recommendations on the designs to the U.S. Treasury, which makes the final call.

The CCAC made its selections for the 2017 quarter designs at an Oct. 8, 2015, meeting. Members said the Ozark National Scenic Riverways quarter design was so gorgeous it could become the most beautiful coin of the 56 quarters in the series. This design depicted a spiny softshell turtle bobbing its head toward an approaching kayaker. The CFA did not recommend the turtle design for the Ozark National Scenic Riverways quarter. Instead, it selected a design that included Alley Mill, a steel roller mill built in 1894. And alas, on Sept. 1, 2016, the U.S. Mint unveiled the final designs for their 2017 America the Beautiful quarters and it was the Alley Mill design and not the turtle design we will see on the Ozark quarter.

The June 27 CCAC meeting was held as a public meeting at the Colorado College in Colorado Springs during the 2016 American Numismatic Association Summer Seminar. I attended this meeting.

And why do I care that turtle coins were favorite quarter designs by the CCAC two years running? In addition to being an avid U.S. coin collector, I collect world coins, notes, and exonumia with turtles on them. In 2011, I was snorkeling in Maui with my wife and we saw a green sea turtle swimming in the ocean. Seeing this together led to turtles becoming a special symbol of our relationship.

In the July 4, 2011, issue of Coin World, Rita Laws wrote a Going Topical article on turtles on coins that started me to pursue turtle coin collecting with a passion. So much so, that in the August 10, 2012, issue of Coin World, I wrote an article titled “Column inspires path for turtle herding collector to follow.” At the time, I had 96 turtle coins, tokens, and notes from 50 different countries. The collection has now grown to 779 turtle coins, notes, and exonumia from 113 countries.

During the 2016 Summer Seminar, I decided to write a book on collecting turtle coins, notes, and exonumia. I will likely do a self-published book. However, if the 2018 America the Beautiful quarters have turtles on them, these new coins may help spark an interest in turtle-related numismatic books around the world.