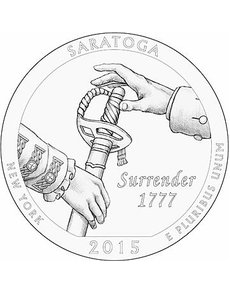 The Citizens Coinage Advisory Committee endorsed the above design for the 2015 Saratoga National Historical Park with the recommendation that the inscription SURRENDER 1777 be changed to BRITISH SURRENDER 1777. 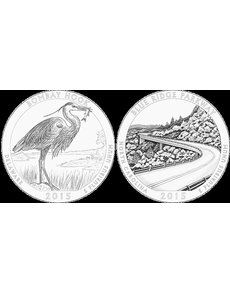 For the 2015 Bombay National Wildlife Refuge quarter dollar, the CCAC endorsed a design depicting a great blue heron with a fish in its beak. A design depicting the Linn Cove Viaduct, a winding curve that was said to showcase some of the Blue Ridge Parkway’s mountain scenery, was recommended for the North Carolina coin. 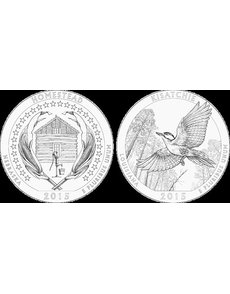 CCAC members recommend that its design choice for the 2015 Homestead National Monument of America quarter dollar have the 30 stars eliminated and the words FREE LAND added. For the 2015 Kisatchie National Forest quarter dollar design the CCAC endorses, the group recommends the trees be trimmed back so as not to obscure the bird.
Previous
Next

When the Citizens Coinage Advisory Committee meets to discuss the designs of new coins and metals, the U.S. Mint’s artists frequently get berated.

But when the CCAC held its Feb. 11 meeting in Washington, it was Joseph F. Menna, a Philadelphia Mint-based sculptor-engraver, who turned the tables on the committee.

Speaking via a closed circuit TV link, Menna told the panel that their ideas threaten to impose too many restrictions on Mint artists.

If all the committee’s ideas are accepted, U.S. coinage would “risk becoming the J.C. Penney of the world,” he said.

CCAC members were taken aback by Menna’s allegations and several later promised to work on restoring a better working relationship with the artists, most of whom work at the Philadelphia Mint.

Michael Bugeja, an Iowa State University journalism dean, said that Menna has misunderstood the committee’s efforts to move away from what the CCAC had frequently derided as “storyboard” art for coins and medals.

Menna’s complaint was one of the highlights of a meeting that saw the committee endorse five proposed designs for the reverses of 2015 America the Beautiful quarter dollars and lavish praise on the Mint’s proposed John F. Kennedy gold half dollar. (See JFK gold coin coverage in March Monthly Edition of Coin World.)

For the Homestead National Monument of America in Nebraska, the panel favored a design showing the three essentials for a homestead: food, shelter and water.

That design drew 19 points under a voting system that allows each CCAC member to give up to three points for any design.

With 11 members present, that meant a maximum of 33 points could be awarded and 17 points needed for an endorsement.

The committee recommended removing 30 stars from a circle around the cabin that represents the state offering free land to homesteaders.

Earlier, a CCAC member had said the FREE LAND inscription looked like a “neon sign” on another proposed design showing the inscription above a plow on a farm field.

In response, Engler asserted that the promise of free land was the essential element that made the Homestead Act of 1862 a lure for thousands of people from around the world.

For the Kisatchie National Forest in Louisiana, the CCAC voted to show an image of an endangered red cockaded woodpecker in flight against long leaf pine trees.

That image drew 21 points. The committee urged that the trees be trimmed back to avoid obscuring the bird.

For the Blue Ridge Parkway in North Carolina, the panel urged its reverse show the Linn Cove Viaduct, a winding curve that was said to showcase some of the road’s scenic mountains.

The design drew 27 points, making it the strongest design among all coin design submissions shown to the committee.

For the Bombay Hook National Wildlife Refuge in Delaware, the CCAC endorsed a design showing a great blue heron with a fish in its beak. The design pulled 20 points and was closely followed by a design showing two Canada geese in flight that drew 19 points in the balloting.

None of the 10 reverse designs for the Saratoga National Historical Park in upstate New York, scene of a major 1777 battle in the Revolutionary War, could muster enough points for an endorsement in the initial balloting.

The leading design drew 14 points, three fewer than needed for a formal endorsement.

The proposed wording, “Surrender 1777,” made some CCAC members believe the coin would be saying America surrendered.

So a compromise was reached, to retitle the coin as “British surrender 1777.” With that agreement, the design won the CCAC’s recommendation.

All 44 designs reviewed by the CCAC were scheduled for review Feb. 20 by the Commission of Fine Arts.

Like the CCAC, the CFA also forwards its recommendations to the Treasury secretary as to what designs should be placed on the coins.

Treasury Secretary Jacob “Jack” Lew or his designee has the final say on U.S. coin designs.

In another action, the CCAC voted unanimously to suggest in its annual report that the 50th anniversary of the 1969 Moon Landing by Apollo 11 astronauts should be marked with a commemorative coin in 2019.

That recommendation will go to Congress, which legislatively decides what commemorative coins the Mint should issue. ■