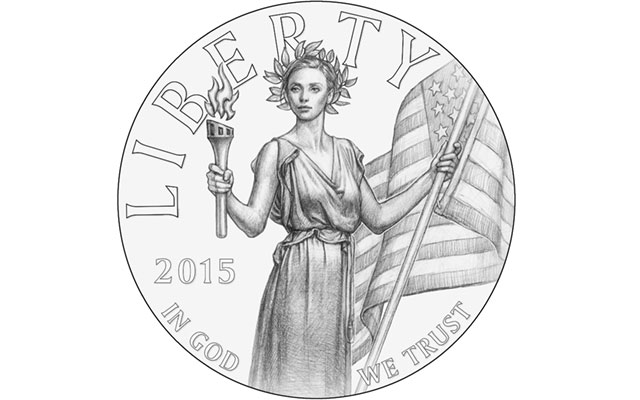 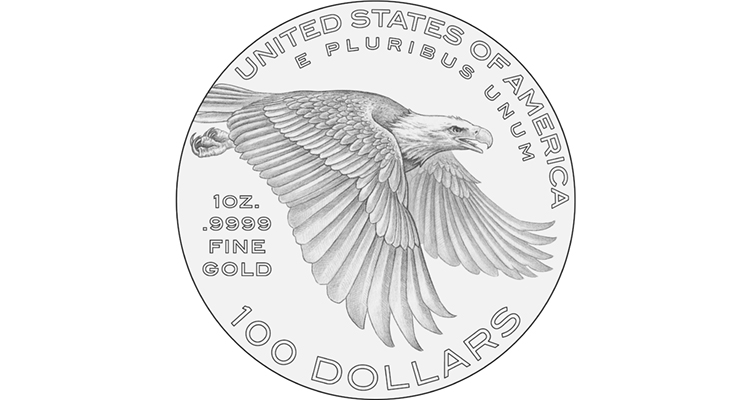 The CCAC recommends this design for the reverse of the planned 2015 High Relief gold coin and silver medal, though with some changes. The design is also one of two recommended for the coin by the CFA.

Members of the Citizens Coinage Advisory Committee enthusiastically called for a number of major changes to the U.S. Mint’s proposed High Relief gold coin and silver medal programs, declaring that their changes would produce another blockbuster coin series.

In a series of six unanimous votes at their Jan. 27 meeting in Washington, the panel endorsed designs for what the Mint’s tentative plans depict as a pure gold $75 coin and silver medal set.

The committee then chided the Mint for planning the set as one-time product.

It declared that the set should be a continuing series of annual coins and medals — one that would press the panel’s desire for a more modern Liberty image.

The new gold coin should carry an image of Liberty as a more “multi-cultural” figure, and it should be on a larger planchet than the Mint was planning, the panel advised.

It is a case, said CCAC Chair Gary Marks, where bigger will be a better coin.

Its face value should be $100 and it should be call a “union,” the panel declared.

That was the name of a $100 coin that the Mint developed but never issued in the 1870s, CCAC members said.

In recommending designs for the coin, Marks noted, the committee cast its first two unanimous votes ever for a single coin.

The panel gave 30 points to both its recommended obverse, of a Liberty figure holding a torch and U.S. flag, and its recommended reverse that shows an eagle flying with an olive branch in its talons.

Marks said the 30-point votes showed that every one of the 10 CCAC members had given those two designs the maximum three points allowed, under a voting scheme that shows the strength a design has with the panel.

Never could he recall a similar issue drawing such a vote.

“It’s a pretty powerful statement,” Marks said after the vote was announced.

Members of the Commission of Fine Arts also endorsed both designs for the gold coin and silver medals, but they also recommended two other design possibilities for the set.

Treasury Secretary Jacob Lew will have the final word on what design is accepted, but members of the CCAC were openly excited about their choices for the set, predicting it would be hugely popular with collectors.

Marks said the Liberty figure “is not an Anglo face” but perhaps someone of “mixed heritage.”

The CCAC did not endorse a design of an African-American Liberty as the CFA had done at its Jan. 22 meeting.

CCAC members said they rejected that figure because it did not display as much Liberty iconology as did their chosen design.

So what was the deal with all those new Liberty designs released Thursday?: Morning Report

Marks, a leader on the panel in calling for more a contemporary Liberty on U.S. coins, predicted that the selected design would “be stunning.”

Heidi Wastweet, a sculptor from Seattle, called the panel’s selection “a really beautiful design,” adding later it was “not in-your-face modern” but more of a contemporary design.

Robert Hoge, a numismatic curator, said the Mint’s artists had presented the panel with “a number of beautiful designs. We can’t go wrong.”

Journalism professor Michael Bugeja said that for many people “the concept of Liberty has been hard to understand” and that’s why the idea of a more modern figure cannot be “expressed in one medal.” A series is needed, he said.

The CCAC recommends that the IN GOD WE TRUST lettering shown along the rim of the gold coin be moved to the left of the Liberty figure and placed in two lines of type. That inscription, as well as the year “2015,” should be shrunk and should form three lines of type.

IS IT LIBERTY, OR IS IT WONDER WOMAN?

Marks repeated his call for modern designs when the Mint sought the committee’s advice on what it should do for the 20th anniversary of the American Eagle platinum coin in 2017.

“This is an opportunity for new and fresh programs,” said Marks, pushing aside a suggestion that the panel should retain the current designs on the coins for another year.

Also recommended were a series on the arts and American inventions or inventors.

Mint officials said they will consider these idea with marketing officials and return to the committee with more ideas.