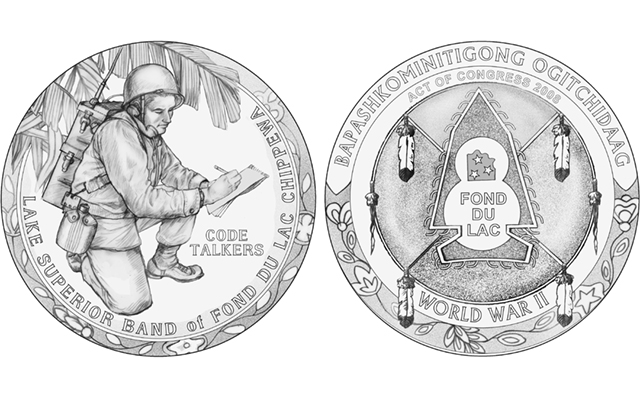 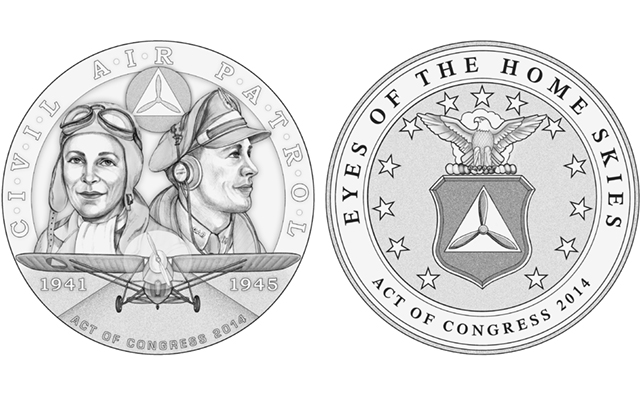 The CCAC-recommended designs above for the Civil Air Patrol congressional gold medal were selected from among 16 obverse and 15 reverse designs proposed for consideration.

Obverse and reverse designs were recommended Sept. 23 by the Citizens Coinage Advisory Committee from among those proposed for congressional gold medals.

For the Code Talkers medal, CCAC members wasted little time in approving an obverse design and a reverse design that had previously been endorsed by the Commission of Fine Arts and were the tribal preferences.

A U.S. Mint representative said source materials given to the artists who rendered the designs were provided by the Department of Defense. The Mint official indicated the equipment and firearms were not meant to be specific to any tribe or military unit. She said she would be back in contact with the Department of Defense to ensure there are no  problems with the design.

The recommended reverse depicts a variation of the Fond du Lac Tribe seal with a beading pattern around the border.

Savage said the family of Porter, who passed away in 1990, did not know of his service as a Code Talker until family members were invited to a congressional ceremony in November 2013 recognizing all Code Talkers.

CCAC members individually expressed how impressed they were with the overall quality of the proposed designs submitted for the Civil Air Patrol medal.

Before CCAC members began their discussion, they reduced the number of designs considered  to seven proposed obverses and five reverses.

The recommended obverse design depicts two Civil Air Patrol pilots — one female, one male — with the CAP roundel centered above and behind them.

The two figures are positioned over an armed single-engine CAP aircraft as it lifts off the runway on a mission.

The recommended reverse reflects a variation on a CAP insignia, with EYES OF THE HOME SKIES inscribed around the top border.

CCAC members approved a motion from professional artist and CCAC member Heidi Wastweet to suggest removal of the inscription ACT OF CONGRESS 2014 from the base of the obverse but to retain it on the reverse along the bottom border. A second motion from Wastweet was also approved, which recommends moving the pilots’ heads away from the border, at the artist’s discretion.