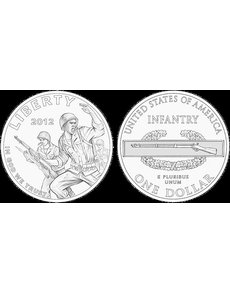 The Citizens Coinage Advisory Committee recommends these designs for the 2012 United States Army Infantry commemorative silver dollar. The obverse recommended is different from one preferred for the coin by veterans organizations.

Members of the Citizens Coinage Advisory Committee broke with the veterans group pushing for a silver dollar to commemorative the U.S. Army Infantry, recommending an obverse that does not have the veterans’ backing.

That reverse is one of three that had the backing of the National Infantry Foundation, the Georgia-based group that had lobbied for the coins and could make $3.5 million from their sales.

But the foundation had not endorsed the CCAC’s choice for the obverse.

It wanted the coins to show either a modern infantryman charging or a view of three contemporary infantrymen moving toward combat.

Instead the committee liked the energy of a design showing three soldiers with one giving the “Follow Me” order that the veterans had called essential to the coin.

Under a balloting scheme that allows each member give up to three points to every design, the backed design drew 14 points out of a possible 27 points. The second most popular design was one that showed a single charging infantryman, which received 13 points.

The veterans’ preferred designs got 10 points and six points, respectively.

CCAC Chairperson Gary Marks noted that the committee’s choice “just barely” got enough points under the scoring system to be considered backed by the plan.

“I really like” the selected design, he said. “This design really speaks to me.”

The recommendations puts the CCAC at odds with the Commission of Fine Arts, which endorsed designs that the veterans wanted. It selected the charging modern soldier for the obverse and the Infantry’s insignia, a pair of crossed rifles for the reverse. (See related article, Page 5.)

The recommendations from both coin review panels will now go to Treasury Secretary Timothy F. Geithner, who will make the decision as to which designs will go on the coin.

The CCAC did agree with the CFA on which designs should be selected for a gold congressional medal to honor Japanese Americans who fought with the U.S. Army in World War II.

The CCAC gave 24 out of a possible 24 points to an obverse design showing a line of Japanese American soldiers against a fluttering American flag and a color guard of the soldiers. Marks noted that it was a rare vote by the panel to give the maximum points to any design.

For the reverse, the CCAC favored a design showing the three patches of Army units being honored. It got 21 of a possible 24 points.

A motion to add more stars to the fluttering flag on the obverse failed for lack of a second, but the committee did recommend that the phrase “Act of Congress 2010” be added to either side of the medal.

An emotional account by a Japanese-American veteran of what the selected obverse depicted clearly impressed the committee. University of Maryland history professor Michael A. Ross called it “one of the cooler moments on this committee.” He enlisted the veterans to speak to his classes and was photographed with them.

Typically the Treasury Secretary and the coin reviewing committees give great weight to the wishes of the organization seeking a coin or medal. That may make the silver dollar coin recommendations especially interesting.

The National Infantry Foundation representatives had stressed that they wanted the soldier on the obverse to be a contemporary soldier, not a World War II infantryman like the famous “Follow Me” statue at the Infantry School at Fort Benning, Ga.

“We like the more modern symbol,” Ben Williams, executive director of the National Infantry Foundation, told the CCAC. “The ‘Follow Me’ statue is one thing that every soldier at Fort Benning has seen. It’s truly an iconic image.”

“These warriors deserve the very best coin possible to honor their service,” said Michael Olson, a CCAC member from Pella, Iowa, and a Army National Guard officer. He wanted strongly to add the words “Follow Me” to the winning design.

“ ’Follow Me’ is to the Army what ‘Semper Fi’ is to the Marines,” Olson said.

Others on the panel said they didn’t believe the words were necessary. The symbolism of the raised hand beckoning the troops onward was better than words, they told Olson.

On that, the panel seemed to agree.

The members said they found the World War II soldiers better drawn and more expressive than the contemporary soldiers.

New Jersey lawyer Donald Scarinci, pleaded for the veterans to reconsider their rejection of a design showing a soldier leading three men in silhouette across a fluttering American flag. “This is a work of art,” he said, saying that most of the designs were “just another soldier.”

But his plea had little impact on the committee, which did not seem impressed by the silhouettes used on the designs.

Heidi Wastsweet, a Seattle sculptor, strongly supported the charging infantryman, which came in only one point behind the backed obverse. “I really like this. It’s very dynamic,” she said.

She criticized the hands and facial expression of some of the soldiers on the design, warning that Mint artist needed to make the hands of their subjects larger and be more careful about the proportions of their bodies.

No one on the panel seemed happy with a design showing three soldiers, two of whose feet had disappeared apparently into water.

Marks said that design would assure the Mint would receive more of the criticism it got with the 2003 Illinois State quarter dollar that showed Abraham Lincoln’s legs cut off. ¦