Causes many for peripheral letters abruptly cut off by 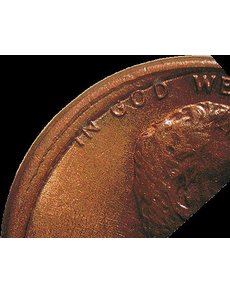 A die attrition error carried away the outer portions of IN GOD WE TRUST in this 1983 cent. 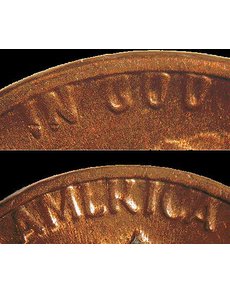 The outer tips of the peripheral letters of this 1982 Lincoln cent were lost due to expansion and erosion of the die face internal to the rim gutter. 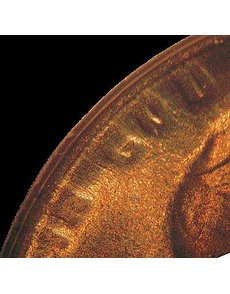 A conventional case of extreme die wear is seen on this 1955 Lincoln cent. 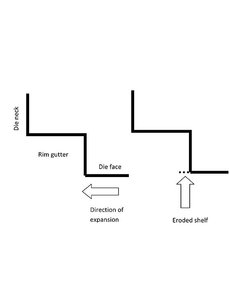 The mechanism thought to underlie letter truncation on Shane Lonitz’s 1982 Lincoln cent is depicted in this schematic diagram. 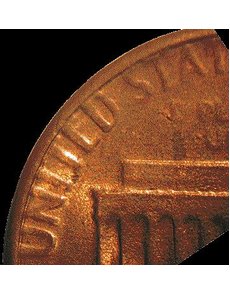 Peripheral letters that terminate prematurely at their outer margins appear surprisingly often among coins struck inside the collar. But the causes are many and varied.

Letters that “run off” the edge of an in-collar strike are most often caused by a horizontal misalignment of the hammer die. On rare occasions, a first-strike counterbrockage will include peripheral letters that are cut off along the edge of the coin.

Fadeout of peripheral letters within the body of an in-collar strike has many causes — an abnormally hard planchet, a weak strike, a tilted die error (vertical misalignment), a thin or tapered planchet, a “grease” accumulation just inside the die’s rim gutter, an uncentered planchet struck against a stiff collar, missing or inadequate upset of the blank and excessive die convexity. The last two factors are responsible for the notoriously poor strike on many 1985-D Roosevelt dimes.

Abrupt truncation of letters within the body of an in-collar strike is rarer. The two most common causes are the presence of a thin, crescentic cud (marginal die break) and various forms of peripheral die damage. Both result in abrupt or gradual loss of the die’s perimeter.

The best characterized form of peripheral die damage is the die attrition error, an example of which is shown here in a 1983 Lincoln cent. In a die attrition error, a misaligned hammer die smacks repeatedly against the beveled entrance to the collar. This gradually wears away the field portion of the die and often the rim gutter as well. Here the words IN GOD are abruptly truncated and replaced by a raised, featureless crescent.

Roll-hunter Shane Lonitz recently came across a 1982 Lincoln copper-zinc cent with an unfamiliar form of peripheral letter truncation. The letters on both faces abruptly terminate within the body of the coin right next to a well-defined design rim (see photos).

This clearly represents a type of die deterioration/deformation error, as evidenced by abundant signs of advanced die wear. But die deterioration has never previously been known to result in peripheral letter truncation. Instead letters become bloated and stretched-out as they migrate toward an increasingly indistinct design rim, as shown in the accompanying 1955 Lincoln cent.

What happened to the dies that struck Lonitz’s cent is very different. Here each die face expanded and extended beyond the medial wall of the rim gutter, forming a thin shelf that was immediately and continuously worn away by the act of striking coins (see drawing). A less advanced level of erosion is seen on another 1982 copper-alloy cent struck by a different die pair and representing a later die state. I have given the name “peripheral die expansion and erosion” to this apparently overlooked phenomenon.

I suspect that there was either an intrinsic flaw in the die steel or that the dies were improperly prepared during annealing, tempering or quenching. The improper preparation resulted in an abnormally soft die face surrounded by a rim gutter of normal hardness.

This error is closely related to another rare die deterioration/deformation error that I’ve labeled “design creep.” Here the entire die face (including the rim gutter) mushrooms out like the head of a railroad spike. This carries the rim gutter and the design beyond the collar, resulting in truncation of letters at the edge of the coin.

I’ve seen some impressive examples among fractional euro coins. Among U.S. coins, design creep is most likely to be detected among issues with a very thin design rim and where letters and numbers touch the design rim. These would include the 1982 Washington quarter dollar obverse and the 1979 Roosevelt dime obverse. I’m still waiting to find a truly convincing domestic example.