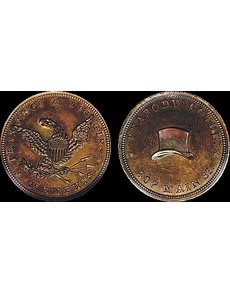 Research indicates that the illustrated Francisco & Wiggin Peabody Hotel store card, elsewhere attributed as having been produced likely sometime in the 1850s, was issued well after the Civil War.

An antebellum-cataloged store card was actually struck years after the Civil War.

According to Rulau’s research, the store card type is one of several interconnected issues for a hatter operating in both Memphis and Nashville.

Rulau places the Francisco & Wiggin store card in the decade of the 1850s although “no dates can be assigned with certainty.”

I think I can help; it appears the store card was issued much later than that!

My first clue was an Internet article on the hotel, which states that the Peabody that I had been familiar with had been erected in 1925, but that “the original Peabody Hotel was built ... in 1869.”

Since I’ve found Internet sources to be iffy, I looked closer. Here’s what I found in contemporary newspapers and business directories:

Hat and fur dealer A.J. Francisco was located in Nashville in the 1850s.

The firm of Francisco & Whitman flourished there at 23 Public Square in 1853, but by 1854 Whitman had left the partnership.

By January 1862, Francisco, still in Nashville, had also associated with N.J. Wiggin in Memphis, where the hat shop of Francisco & Wiggin was located at 289 Main St.

By 1866, Francisco had also set up a partnership with George P. Wiggin in New Orleans, also styled as Francisco & Wiggin at 30 Camp Street.

Meanwhile, in Memphis, the firm continued at 309 Main through at least April 1867.

The Peabody must have actually been built in late 1868 because by autumn of that year, other businesses were advertising their relationship to the hotel’s location.

By Christmas 1868, even Francisco & Wiggin had added a “Peabody Hat” to its retail line.

However, not until the following September did Francisco & Wiggin ads bear the 307 Main St. address shown on the store card.

In the mid-1870s, Francisco & Wiggin removed to 318 Main St., and Wiggin & Co. became successors to the partnership.

However, by January 1882 new advertisements for Francisco & Wiggin hat shop appear, but the source I have viewed has a garbled address.