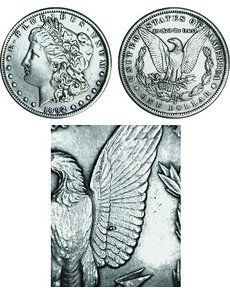 Counterfeit cast copy 1892-S Morgan dollar weighs 2 grams less than a genuine coin. Liberty’s hair and the eagle’s feathers are ragged, the rims are more pronounced and edge reeding is shallower than it should be compared to a genuine coin.

The Morgan dollar series has been heavily counterfeited over the past 10 years, with fakes flooding into obscure locations such as flea markets, garage sales and Internet sales.

Collectors generally do not have to worry about the authenticity of purchases from reputable coin dealers and auction companies, as these firms are quite good at screening out the fakes.

The counterfeit shown here is a little different from the typical fake Morgan dollar.

Most of the fakes we see at ANACS can be quickly identified by crude date digits, and others by their lack of proper design styles (for example, an 1885 dollar with a 1921 style eagle on the reverse).

The counterfeit featured in this column is a cast copy that was produced from a genuine Morgan dollar, so the date digits, lettering and design style are accurate.

On first glance, the coin was not an obvious counterfeit. Our initial impression with this counterfeit was that it was a lightly circulated piece that had been heavily polished.

Further examination showed that the surfaces were a bit rough and lightly pitted in the fields, and the weight of the coin seemed a bit “off” (if you handle enough coins, you eventually learn what the heft of a genuine silver dollar or $20 gold piece should be). Weighing the coin confirmed our suspicions, as it weighs 24.74 grams. This is approximately 2 full grams less than a genuine coin should weigh, which is well outside the tolerance levels.

Other diagnostics for this counterfeit are rims that are more pronounced than on a genuine coin, slightly ragged details in Miss Liberty’s hair and the eagle’s feathers, and edge reeding that is shallower than it should be.

Collectors need to be on their guard with this type of fake, as the light weight would be hard to determine if the coin were in a holder.

In the case of this 1892-S Morgan dollar, with a Very Fine piece priced at $175 and an Extremely Fine coin priced at $500, many collectors would be tempted to take a chance on a polished About Uncirculated piece being offered for $100 to $150.

Unfortunately, if the coin turns out to be a fake, it contains at most $10 to $20 in silver.

Definitely not a bargain.