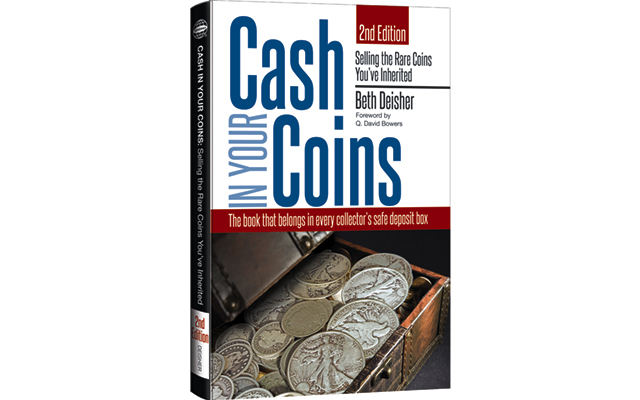 Taxes. No one wants to pay them. But the reality is they exist.

As a collector, neither you nor your heirs should pay more than is legally required. To ensure that you and your heirs don’t overpay requires action now, not later (after you depart planet Earth). Awareness and good planning are the keys to peace of mind for you and protection for your heirs.

The second edition of Cash In Your Coins — Selling the Rare Coins You’ve Inherited just released by Whitman Publishing includes a new 16-page chapter devoted to the subject of “Taxes.”

Here we are sharing an excerpt from that chapter that provides some very basic information.

First, however, a disclaimer: The following information regarding the various types of taxes is general in nature and should not be construed to be legal advice regarding taxes. Rather, it is provided to make you more aware of possible taxes related to your estate or coins and collectibles you may inherit or sell. For specific advice regarding your circumstances, it is best to consult your accountant, an attorney specializing in taxes, or an estate-planning professional.

Probate, the procedure for settling the estate of a deceased person, is conducted in and according to the laws of the state in which the deceased maintained legal residence. Probate retitles a deceased person’s property and puts it into the designated beneficiary’s name.

If the deceased person had a will, he or she probably named a person or persons as executor or co-executors. If no one is named executor in the will, the probate court names an administrator (who functions the same as an executor).

The value of the estate is important in determining whether it is subject to various taxes.

Some states require the executor or administrator, within 90 days of being appointed by the court, to prepare what is referred to as the 90-day inventory. The 90-day inventory lists all property and assets of the deceased and declares a current fair market value of the items. If there are questions regarding values listed on the 90-day inventory, they must be resolved by the time the final inventory is filed with the court.

The final inventory is used in distributing assets of the estate to those named in the will. If no will exists, the estate is distributed to heirs according to state statute (such a situation is called intestacy, and the estate is said to be intestate).

Property (cash, real estate, stocks and other assets, including precious metals, coins and other numismatic holdings) owned by a person at the time of his or her death becomes what is known as the “decedent’s estate.”

When an estate is transferred to heirs, the federal government may collect a federal estate tax.

The tax is owed by the estate of the deceased person and is paid by the estate prior to the transfer of the property to recipients or heirs. Those who receive money or property from an estate are not required to pay the estate tax, nor do they pay any income tax on the value of the inherited property.

The estates of most Americans do not require the filing of a federal estate tax return (IRS Form 706—Estate Tax Return) because the combined estate’s gross assets and prior taxable gifts do not exceed the exemption established by the American Taxpayer Relief Act of 2012. This established the federal exemption threshold at $5 million per individual, and a maximum tax rate of 40 percent above the exemption.

The Tax Policy Center’s research reported in 2013 that 99.86 percent of estates owed no federal estate tax and that among the 3,780 estates that paid tax, the “effective” tax rate — that is, the percentage of the estate’s value on which taxes were paid — averaged 16.6 percent.

The American Taxpayer Relief Act of 2012 made permanent the “portability” of a deceased spouse’s unused federal estate-tax exclusion. The provision was initially enacted as part of the Tax Relief, Unemployment Reauthorization, and Job Creation Act of 2010, effective for married persons dying on or after Jan. 1, 2011, and would have ended Dec. 31, 2012, had it not been made permanent by the ATRA of 2012.

For both federal gift and estate-tax purposes, the surviving spouse’s exclusion is the sum of his/her own exclusion plus the first-to-die’s ported DSUE amount.

Using portability, it is effectively possible to qualify and use the maximum total exemption, if the first to die has not used any of his/her federal gift-tax exemption.

Since all of John’s assets were transferred to Mary, his spouse, Mary’s exemption in 2014 (for gift and/or estate-tax purposes) is $10.68 million. Mary could make gifts up to $10.68 million in 2014 and fully shield her estate from federal estate taxes.

In order for the surviving spouse to be able to use the DSUE amount, the executor of the first-to-die’s estate must make the election on IRS Form 706, the same form that is required for estates exceeding the federal estate-tax exemption, and file it in a timely manner.

For estates with a gross value large enough to require the filing of a Federal Estate Tax return (IRS Form 706), the return (including an itemized appraisal) must be filed within nine months of the date of death. (If good cause can be shown, extensions of various lengths are available to file the return or to pay the tax, but interest accrues. Penalties may be assessed against the estate if the federal estate tax is not paid when due and extensions are not obtained.)

Fair market value is defined by the IRS as “the price that property would sell for on the open market. It is the price that would be agreed on between a willing buyer and a willing seller, with neither being required to act, and both having reasonable knowledge of the relevant facts.”

If your estate will be large enough to trigger federal estate tax, you should obtain advice from an experienced estate-planning professional who can help you sort through your options. There are a number of estate-planning tools you can use to reduce estate-tax liability.

Estate tax (whether federal or state) is based on the net value of property owned by the deceased. The tax, if any is due, is paid by the estate and must be filed and paid before the estate can be closed or property transferred to the beneficiaries. Estate tax has nothing to do with the person who inherits property.

The good news is that the trend over the last decade among states has been to abolish state estate taxes.

Currently, inheritance taxes are collected in seven states. Inheritance tax rates vary widely depending on the person inheriting the property and his or her kinship to the deceased. In some states spouses are exempt from paying inheritance tax.

Some states now include exemptions for civil-union partners. Rates can also vary, depending on the value of the property inherited. For example, New Jersey has graduated rates from 11 to 16 percent on property valued above $500. There is no New Jersey inheritance tax imposed upon parents, grandparents, children and their descendants, spouses, civil-union partners, domestic partners or charities. New Jersey provides a $25,000 exemption for siblings, sons-in-law, and daughters-in-law.

Check the accompanying chart and notes. Identified are the District of Columbia and the 14 states (as of April 2014) that collect estate taxes as well as the seven states that collect inheritance taxes. The notes provide brief details about exemptions and rates.

If you do not live in these states or the District of Columbia, you probably will not have to worry about estate taxes or inheritance taxes for your estate.

However, it is entirely possible that you may inherit property from someone who had legal residence in one of the states or the District of Columbia at the time of his or her death.

Also, be sure to check from time to time the status of the state in which you reside. Tax laws can be changed quickly through legislation signed into law.

Further notes on states that have estate, inheritance taxes

??Hawaii Estate Tax: Estates below $3.6 million exempt. Tax rates range from less than 1 to a maximum of 16 percent.

??Iowa Inheritance Tax: Rate ranges up to maximum of 15 percent for estates valued at $25,000 or more. No taxes for surviving spouse, stepchildren, lineal descendants, or lineal ascendants.

??Maryland Inheritance Tax: Property passed to individuals other than spouse, lineal descendants, lineal ascendants, sibling, or spouse of child is taxed at 10 percent.

??New Jersey Inheritance Tax: Graduated rates from 11 to 16 percent on property valued above $500. No tax for parents, grandparents, descendants, children and their descendants, spouses, civil-union partners, domestic partners, or charities. $25,000 exemption for siblings, sons-in-law, and daughters-in-law.

The 304-page expanded second edition of Beth Deisher’s book Cash In Your Coins: Selling the Rare Coins You’ve Inherited, published by Whitman Publishing, was to be available Sept. 13 online (including at Whitman.com) and from book sellers and hobby shops nationwide for $9.95.

The first edition of the book, published in June 2013, won the Numismatic Literary Guild’s “Best Specialized Book on Numismatic Investments” award for 2014 and a first-place nonfiction award from Ohio Professional Writers.

The second edition is expanded with 16 additional pages, updated case studies, the new chapter on taxes, new illustrations and more.

Deisher wrote Cash In Your Coins to inform and protect the hundreds of thousands of Americans who already collect coins, and those who will someday inherit their collections.

Deisher is an award-winning journalist and retired editor of Coin World.

For additional information or questions, contact the author via email here.

Estate and Inheritance Taxes: States and District of Columbia (Information current as of April 2014)

??District of Columbia, Yes / No

* Although defined as inheritance tax, value is based on property.