Case of the moving Mint mark 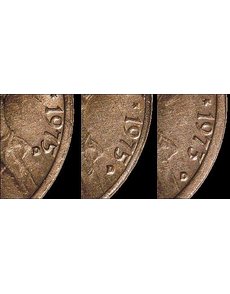 I received a roll of dimes and noticed the placement of the Mint marks varies. All of the dimes are from 1946 and 1947.

Some of the Mint marks are up against the torch handle and others a millimeter or so away. What is the significance of this shift?

The effect you noticed on the dimes well illustrates the differing locations of Mint marks normally found on all circulating coins struck before 1990.

Show above are close-up photographs courtesy of Coin World columnist Mike Diamond that demonstrate the moving Mint mark on Jefferson 5-cent coins. The same concept applies to the dimes you found. Three different positions that are high, intermediate and low are pictured.

Mint marks were punched into working dies by hand up until 1990. For any given series and date, a collector could track down any number of minutely different Mint mark locations.

The changes were prompted in part by the discovery of a rash of Mint mark varieties and errors that proved embarrassing for the U.S. Mint. From the late 1960s to the 1980s, the Mint produced a number of Proof error coins, plus a 1982 dime struck for circulation, when dies lacking a Mint mark were used for production.

To prevent such errors from occurring, Mint marks were added at earlier design stages rather than as one of the final steps involving the working die.

The changes to when Mint marks became a part of the design occurred in stages. Mint marks are now added at the initial model stage, meaning that a Mint mark is present at every stage of modeling and die production.

The changes in techniques also resulted in cost and time savings since thousands of working dies no longer have to be individually stamped with a Mint mark.

It is not unusual for U.S. coins struck before the 1990s to show slight differences in Mint mark locations. It is more unusual to find a coin on which the Mint mark is touching another design element. Mint engravers normally reject such dies as unacceptable.

Remember, however, that tens of thousands, even hundreds of thousand of coins can be struck from a single die pair, so such varieties are not considered rare.