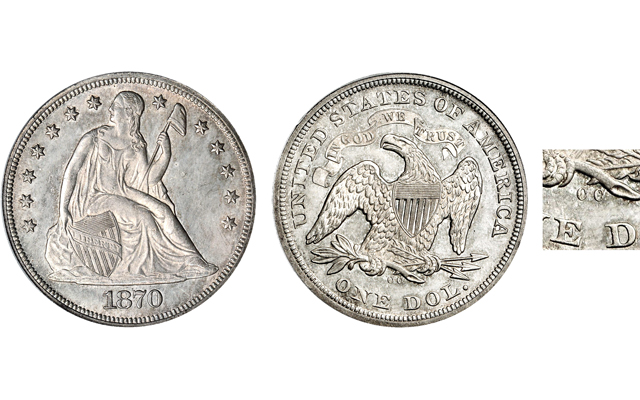 This 1870-CC Seated Liberty silver dollar is from mintage of the first denomination struck at the Carson City Mint.

Last week I told of the rich Comstock Lode in Nevada and Virginia City built on the site. In the early 1860s, its mines yielded a bonanza of silver and gold metal processed by several mills, the largest of which was Gould & Curry. At the time, two Mints operated in the United States: in Philadelphia and in San Francisco.

The builders of Nevada were proud of their industry and the towns that had arisen to service it. Times were prosperous. If a Mint could be established there, gold and silver coins could be produced with ease and efficiency. This made a great deal of sense, and the Act of March 3, 1863, authorized it.

On Oct. 31, 1864, Nevada achieved statehood. The capital was Carson City, which had been developed by Abram Curry, partner in Gould & Curry. Virginia City was only 15 miles away from Carson City.

By December 1869 nearly everything was ready, and it was anticipated that coins bearing a distinctive Mint mark, CC, would be struck for the first time. None other than Curry was appointed as superintendent. Delays ensued, and dies did not arrive on time.

Despite the fact that the Mint was all ready to go but could do nothing, official opening ceremonies were held on Jan. 6, 1870, by which time the facility had been in virtual readiness for a half year. At this point, bullion could be received for assaying and refining, but no coins could be struck. Finally, the dies arrived, and on Feb. 10 the first coins — silver dollars — were struck. Later in February, gold $10 coins were made for the first time at the Carson City Mint, and in March the coinage of $5 and $20 coins occurred.

To outsiders, everything seemed to be ideal at the Carson City Mint. Reality was different.

Curry was a competitor to many other Virginia City mine owners, and the thought of having him benefit from their metal was not pleasing. Moreover, the convenience of having a regional Mint did not address logic. There was not a great call for coins in the area, as Virginia City was the only sizable settlement. They would still need to be shipped to San Francisco, to enter channels of commerce there.