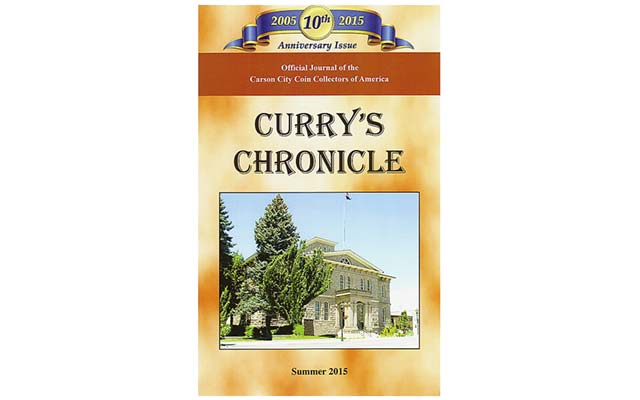 Special edition of Curry's Chronicle marks the 10th year of publication of the official journal of the Carson City Coin Collectors of America.

The following news release was issued by Rusty Goe, founder of the Carson City Coin Collectors of America:

Reno, NV, June 2, 2015 – Rusty Goe launched the Carson City Coin Collectors of America in late spring 2005 because he believed the numismatic community needed a club dedicated to the study of the Carson City Mint and the many fascinating coins that descended from it.

Goe recognized the value of members sharing their knowledge and collecting experiences with other members, which led to him publishing a club journal called Curry’s Chronicle, in honor of Abraham Curry, the Carson City Mint’s first superintendent. The first journal debuted in summer 2005, and since then members have received thirty-four subsequent issues. In the summer 2015 edition, the club and its journal are celebrating their 10th anniversary.

Members from across the country contributed articles and letters to the editor to help commemorate this special occasion.

Michael Parrott, in his article, “The C4OA Celebrating 10 Years – ‘The Journey is the Reward,’” shares the five most important gifts he feels membership in the C4OA has given him: travel, writing, public speaking, photography, and great, lifelong friends.

Mark Archambault describes his hunger for Carson City-related information in his article, “Feeding a Voracious Appetite for All Things Related to the Carson City Mint.” He shares how various activities such as “cyber-digging” on the Internet, reading numismatic books, and learning about the life and times of the Carson City Mint and its employees, help to satisfy his numismatic cravings.

Tony Arnold, in his article “Remember When? – A Retrospective Look at My Time as a CCCCOA Member,” recalls the C4OA’s first annual meeting, held at the ANA’s 2005 summer convention, and the club’s 2006 Carson Mint-Comstock Seminar. Arnold says these and many other memorable experiences as a C4OA member have “allowed [him] to ‘Take it to the limit’ ” many times.

Bill Dunn’s article provides readers with a perspective from a member who signed up later in the club’s life. He emphasizes how, in his opinion, ten years in duration is a “big deal” for the C4OA, and expresses how envious he is of those who have been members of the club since its inception.

“Belay Off” unveils the origin of a special Carson City dime in his article, “In the Shadow of the King – The 1874-CC With Arrows Dime.” He declares how happy he was when he acquired the finest known circulated example of this date-denomination, which had been discovered in France.

Tom DeFina, in honor of the C4OA’s ten-year anniversary, presents his intimate impressions of the club in his article entitled “My Journey with the CCCCOA Began by Taking the First Step in May 2005,” which includes a very special edition of his ever-popular word-search puzzle.

Weimar White’s article, “A Restored 1876-CC Half Dollar,” details how he obtained a holed 1876-CC Liberty Seated half dollar years ago, and subsequently had it repaired to the point where he considers it a very attractive collectible.

First-time contributor James Canfield, in his article “Carson City Morgan Silver Dollars: A Good Financial Investment?” provides a scholarly price-history study of “CC” Morgan silver dollars, in which he compares their long-term performance to other investments that an individual could have made over a ten-year period.

Another first-time contributor, Rick Fleming, in his contribution, “Those Fabulous GSA ‘CC’ Silver Dollars,” explains to readers why he feels the GSA hoard should hold a special place in all Carson City coin enthusiasts’ hearts because of the coins’ “special path of decent to the present.”

Kirk Harris takes readers back in time in his article, “Full Speed Ahead! – The Challenge and Reward of Building a High Grade Set of ‘CC’ Double Eagles,” to when he decided to change his collecting path so he could build a high-grade collection of Carson City $20 gold pieces.

The Carson City Coin Collectors of America is a non-profit club incorporated in the state of Nevada. It is open to any member in good standing seeking to share and receive information about the Carson City Mint and the coins produced there. Dues are $30 a year, which includes a three-issue subscription to Curry’s Chronicle.

Following is the club’s mission statement:

To increase knowledge on the subject of the Carson City Mint and the many fascinating coins produced there, and to promote camaraderie among fellow “CC” coin enthusiasts.

Rusty Goe founded the Carson City Coin Collectors of America in May 2005.