Coin Lore: Coins not quite as fast 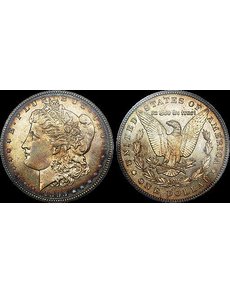 This 1893-CC Morgan dollar graded Special Proof 65 Cameo by Professional Coin Grading Service sold for $141,000 April 25 by Heritage Auctions. It is one of only 12 reportedly struck. It’s not quite as fast as a Porsche 959.

I collect coins and car (my collection has just one car at a time). I buy cars new and drive them till they’re About Good and holed.

I never thought there was much similarity between coin collecting and car collecting until I read a recent story in the New York Times about the 50th anniversary of the Porsche 911. Turns out, coin and car collectors do the same thing, just on a different scale.

The car started life as a 901, but was quickly changed to 911 because Peugeot had the rights to three-digit model numbers with a zero in the middle, according to Times reporter Fred Heiler.

In 1976, Porsche began using zinc-coated steel for the body. The metallic content of coins, too, has changed from time to time. In 1982, just a half dozen years after Porsche added zinc to the mixture, the U.S. Mint did, too. In 1982, the Mint switched from bronze cents to copper-plated zinc ones.

Collectors prize cars made between 1969 and 1973. Dennis Frick, owner of Europa Macchina, a Porsche restoration business in Lewisberry, Pa., told the Times, “The 911 Porsches built after 1973 became heavier, and the pre-1969 cars simply aren’t as good.”

In just about any series, type collectors zero in on dates that were particularly well struck. They avoid such things as mushy Proof strikes of all denominations from the 1950s and poorly struck Indian Head 5-cent coins from the 1920s. Cars and coins, it’s all the same.

The Porsche 911 sometimes is found with a prefix, just like coins; only, we put the letters after the number and call them Mint marks.

The Porsche 911 model is available in upgraded versions, too. The twin-turbo engine Porsche 959 was the fastest street-legal production car in the world when it was introduced in the mid-1980s.

This reminds me that Heritage sold a Professional Coin Grading Service Specimen 65 Cameo 1893-CC Morgan dollar this April for $141,000. Only a dozen are believed to have been struck.

Car collectors, though, do have one great thing going for them that coin collectors don’t. That Porsche 959 will go 200 mph — a lot faster than you can roll an 1893-CC Morgan dollar.