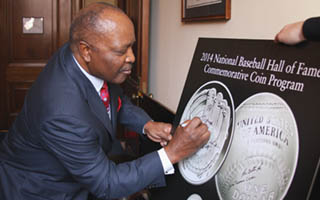 Hall of Famer Joe Morgan autographs a poster for the 2014 Baseball Hall of Fame Commemorative Coin Program during the launch ceremony March 27 on Capitol Hill in Washington, D.C. 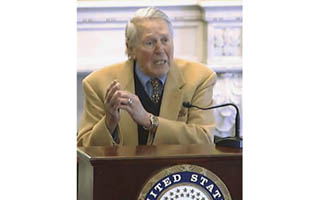 Hall of Famer Brooks Robinson, who anchored third base for his entire 23-season career with the Baltimore Orioles, stresses what the game of baseball has meant to him and what the Baseball coins mean to the appreciation of the sport. 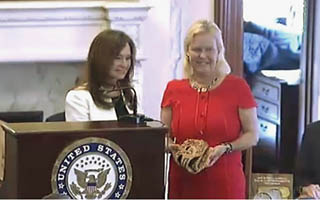 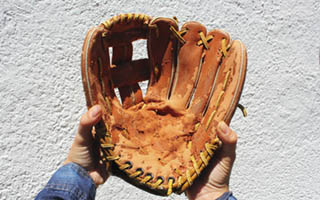 This glove now is on exhibit at the National Baseball Hall of Fame and Museum.

Baseball lingo was plentiful but few of the valuable baseball commemorative coins were on hand March 27 as the U.S. Mint joined with the National Baseball Hall of Fame to launch the sale of the first curved U.S. coins.

The March 27 ceremony, held in a small Senate hearing room on Capitol Hill, marked the beginning of sales for the 2014 National Baseball Hall of Fame gold $5 half eagle, silver dollar and copper-nickel clad half dollar honoring the 75th anniversary of the Hall of Fame.

But there was just one problem. Congressional rules prevented the Mint from selling any of its new coins at the ceremony, although officials did bring a set for the guests to view.

A line of at least 40 buyers had formed at the Mint’s sales center on the first floor of U.S. Mint headquarters in Washington, D.C., where the coins went on sale at noon Eastern Daylight Time.

Actual sales began just minutes after the Capitol Hill ceremony, which brought together some of the New York lawmakers who pushed for the legislation, along with two of the Hall of Famers, Joe Morgan and Brooks Robinson.

Morgan and Robinson were among the five Hall of Famers who considered the 178 proposed designs for the common obverse submitted during a public design competition in 2013.

Baseball kudos galore were proffered at the Capitol Hill event, as Rep. Richard Hanna, R-N.Y., was lauded for hitting one “out of the park” with House passage of the coin bill, and Sen. Kirsten Gillibrand, D-N.Y., was praised for “a perfect game” for getting the bill through the Senate.

“This is such a great day,” said Hall of Fame chairman Jane Forbes Clark.

“These three magnificent coins are the result,” she added.

Baseball has captured the American public because “it’s simple ... it’s forceful,” she said.

Gillibrand agreed, predicting that the coins would be welcomed by a baseball-adoring public.

“I do believe it will be a sellout right away,” she predicted. “It will be the best-selling coin ever.”

Added an equally enthusiastic Hanna. “If you’re sitting here at 12:15 p.m., you’ll miss a chance to buy one of these coins.”

Up to $9.5 million in surcharges

U.S. Treasurer Rosa “Rosie” Gumataotao Rios, an Oakland A’s baseball fan, also admitted to being excited by the coins. Rios said the Hall of Fame stands to make up to $9.5 million in surcharges if all the authorized coins are sold, she pointed out.

The enabling act calls for the production and release in Proof and Uncirculated versions combined of up to 50,000 of the gold $5 coins, 400,000 silver dollars and 750,000 copper-nickel clad half dollars.

The National Baseball Hall of Fame will receive net surcharges once the Mint recoups its production costs.

Rios also noted that she had a chance to strike one of the coins at the Philadelphia Mint and her boss, Treasury Secretary Jacob Lew, had done the same at the San Francisco Mint.

Rios also presented to Clark the glove that served as artist Cassie McFarland’s model for the common obverse. Clark promised that the glove would go on immediate display in the Cooperstown, N.Y., museum that is filled with baseball memorabilia.

McFarland did not attend the Capitol Hill event.

An artist from San Luis Obispo, Calif., McFarland won the public design competition for her rendition of a well-used glove that had been in her house since her childhood.

U.S. Mint Sculptor-Engraver Donald Everhart II, who designed the common convex reverse depicting a baseball similar to that used by Major League Baseball, sculptured McFarland’s design as well as his own.

Everhart, who was at the March 27 coin launch ceremony, predicted to Coin World that the coin would likely be a candidate for “Coin of the Year” next year.

In his remarks during the ceremony, Morgan, a two-time National League Most Valuable Player at second base, said the contest McFarland won produced “tons of great designs.”

Morgan predicted the Mint’s baseball coins would be “the best coins we’ve ever minted in the U.S.”

Robinson, 77, known as the “The Human Vacuum Cleaner” for his unparalleled defensive play at third base for 23 Major League seasons with the Baltimore Orioles, has not played professional ball for decades. However, he noted, “I can still dive and catch ’em. I just can’t get up.”

“This coin is wonderful for the Hall of Fame,” he added.

Both the Commission of Fine Arts and Citizens Coinage Advisory Committee recommended McFarland’s design for the obverse of the coin. Both panels reviewed proposed obverse designs for the coins in the summer of 2013.

The CCAC and CFA votes for the glove design were unanimous.

For many members of the two panels, the choice was an obvious one.

“You have a home run,” exclaimed CCAC Chair Gary Marks at the July 2013 meeting.

The decision, said Donald Scarinci of CCAC, a New Jersey lawyer and medals specialist, was “a no-brainer.”

Noting that the reverse features a baseball, CCAC members in July 2013 agreed with the CFA that the selection of a baseball glove for the obverse was a natural choice.

Both review panels urged the Mint to drop one feature from the original design, a pair of wheat sheaves that Hall of Fame representatives also disliked.