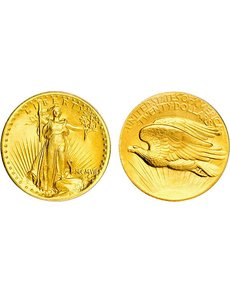 It has been more than a century since an American president has taken a deep interest in coin designs. This 1907 Saint-Gaudens, Roman Numerals gold $20 double eagle was commissioned by President Theodore Roosevelt.

It is election season. Here in New Hampshire, where I live, you cannot throw a copy of Coin World without hitting a presidential candidate. Well, almost. The Granite State is the warm-up area for the quadrennial elections, and before campaigning gets down and nasty, would-be presidents try their stuff here. Chasing them are television crews.

A few elections ago, presidential hopeful Arlen Specter was in town here in Wolfeboro, with cameramen following. Trouble was that not many citizens were up and around on the early Sunday morning of his visit. Ray Merena, my business partner at the time, and his wife, Pat, were having breakfast at the Dockside Restaurant. “Would you mind posing with Mr. Specter?” the newsman asked. Pat and Ray obliged.

Reagan, McGovern, Dole, Bush (41) and Bush (43) — in fact, just about everyone has been here. This year, Mitt Romney doesn’t have far to travel, for he has had a summer home in Wolfeboro for many years. But I digress. Now to numismatics:

It is American Numismatic Association election time. Every two years members of the hobby’s largest coin collector organization vote for their choice of president, vice president and seven governors. This year there isn’t much of an election. Tom Hallenbeck has no challenger for president, and only seven candidates are seeking the seven seats for governor — so all are winners! The only contest is Arthur Fitts III versus Walter Ostromecki for vice president. The winner will be announced in mid-July.

The real winner will be “apathy.” In the most recent ANA auction, with more actual contests than this time around, 29,299 ballots were mailed, but only 9,479 were returned. Nearly 70 percent of the members didn’t bother to vote! But wait! The ANA did very well — at least in comparison to the last election held by our sister hobby group, the American Philatelic Society. For that organization, 37,234 ballots were mailed, but only 3,896 cast valid votes! Amazing. And sad.

Back to the American presidency: the last chief executive who took a deep interest in the nation’s coinage was Theodore Roosevelt — over a century ago! I bet that if a 2012 candidate expressed a sincere interest in coins and coinage designs, many votes would result!