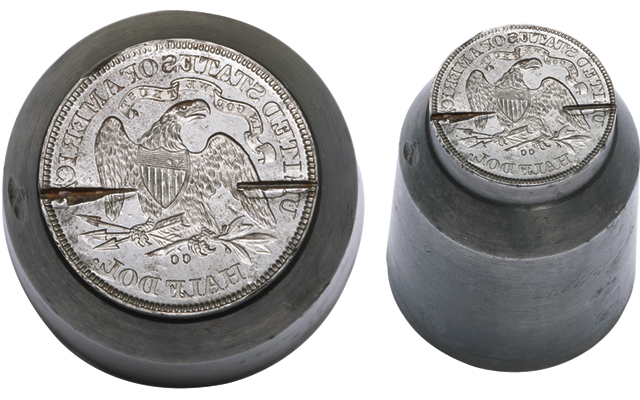 Canceled Seated Liberty reverse die used to strike the WB-1 variety in 1870 was once used by a previous owner as a door stop. 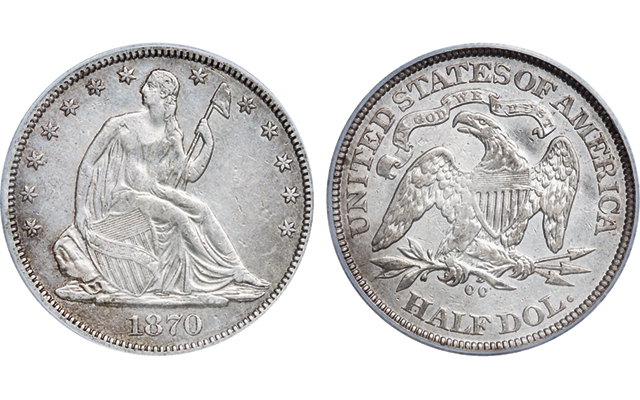 1870-CC Seated Liberty half dollar is one of just a few dozen extant known to have been struck with the reverse die before it was removed from production and canceled.

A canceled 1870-CC Seated Liberty half dollar reverse die once used as a doorstop and an 1870-CC coin contemporarily struck from the die before its cancellation will be on display by Littleton Coin Company, Littleton, N.H.,  during the American Numismatic Association World’s Fair of Money Aug. 5 to 9 in Rosemont, Ill.

The show is being held at the Donald E. Stephens Convention Center.

Littleton President David Sundman a few months ago obtained from Rusty Goe at Southgate Coins in Reno, Nev., a Professional Coin Grading Service Extremely Fine 45 1870-CC Seated Liberty half dollar whose reverse was minted in 1870 using the die that Sundman acquired in 2004.

The 1870-CC coin is one of approximately 200 examples of the 1870-CC Seated Liberty half dollar known to survive, and one of only the few dozen of that total that are of the Wiley-Bugert 1 variety (The Complete Guide to Liberty Seated Half Dollars and A Register of Liberty Seated Half Dollar Varieties, Carson City Branch Mint, Vol. II by Randy Wiley and Bill Bugert).

In total, 54,617 1870-CC Seated Liberty half dollars are reported to have been struck for all varieties.

Sundman purchased the canceled die for an undisclosed price from Fred Weinberg and Co., Encino, Calif.

The reverse die bears two horizontal chisel cuts, starting in the dentils and carrying nearly through both of the eagle’s wings.

According to the 2003 Holabird Americana auction lot description, the die is the only known such die canceled in this manner. The usual manner in which these dies were canceled for removal from production was with an X-cancelation through the entire design using a chisel.

The lot description indicates the die was consigned to the Holabird Americana sale by a family from Virginia City, Nev.

“An assayer, not related to the Mint, moved to Virginia City in the 1930s,” according to the lot description. “The house the family purchased had this die as a doorstop.”

Sundman periodically examined the die once or twice annually since he acquired it from Weinberg.

Sundman said he was prompted to do more research after hearing Bugert speak during a numismatic presentation at the ANA World's Fair of Money in Rosemont on August 2013.

Sundman said he subsequently provided Bugert with a photo of the canceled die. Bugert confirmed the die’s diagnostics as those of the die used to strike the reverse of the 1870-CC, WB-1 variety.

Bugert determined the canceled die bears the Large CC Mint mark and is one of a total of six Large CC reverse dies known to have struck Seated Liberty half dollars during a five-year period.

The canceled die was used only in 1870 with die pair WB-1 and was the first of three reverses used during the Carson City Mint’s first year of production, Bugert ascertained.