Canceled coins can sometimes return to the coining press 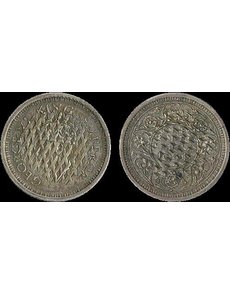 This 50 percent silver 1944 India 1-rupee coin was impressed with a pattern of diamond-shaped indentations. The peripheral fade-out of indentations suggests the use of a pair of cancellation dies with slightly convex faces. 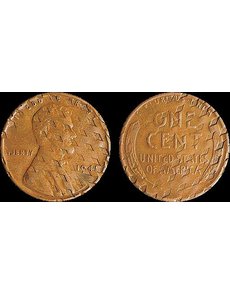 This 1941 Lincoln cent was probably crushed in a vise with studded surfaces for gripping. Because the coin was clamped between two parallel plates, the diamond-shaped indentations here are particularly deep where they overlap high-relief areas like the design rim. 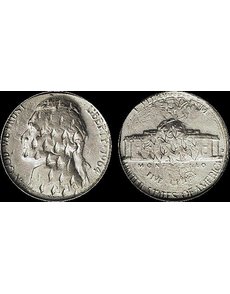 This defaced 1940 India quarter rupee ended up in a press striking 1964-D Jefferson 5-cent coins. How a coin from India entered the Denver Mint is unclear, since the facility has never struck coins for India.

It’s sometimes fun to speculate about wild minting errors that are entirely conceivable but that have not yet been documented. I have, for example, been eagerly awaiting news of the first “waffled” U.S. coin that has been restruck with its original design or with the design of another denomination.

In 2003 the U.S. Mint began crushing rejected coins and planchets, leaving them with a corrugated, vaguely waffle-like pattern. These canceled coins are then shipped out and melted down. Waffled coins are readily available in the marketplace, as there is little attempt to secure them once they’ve left the Mint.

While no waffled coin of recent vintage has found its way back to a coining press, a small group of canceled Indian coins did make their way into U.S. presses in the mid-1960s, including this 1964-D Jefferson 5-cent coin struck on a silver-alloy 1940 India quarter rupee. Before being struck by 5-cent dies, the coin was impressed with a pattern of diamond-shaped indentations.

Another example can be seen on page 262 of Alan Herbert’s Official Price Guide to Minting Varieties and Errors (fifth edition). In this case the design of a 1964 cent was struck over a 1942 India quarter rupee. Herbert suggests that his coin had some “help.” After all, the U.S. Mint has never produced coins for India at any point in its history. Still, there’s reason to think that these particular dual-country errors are purely accidental. It’s unlikely that a criminal conspiracy would involve employees at both the Philadelphia and Denver Mints. There’s also no reason why someone trying to create a valuable dual-country, double-denomination error would choose a damaged host coin.

The distribution and depth of the indentations also provide useful clues. The diamond-shaped indentations are strongest in the center and become shallower toward the periphery. None reach as far as the design rim. This peripheral fade-out is more easily seen on a canceled 1944 India 1-rupee coin.

The peripheral fade-out of indentations and their presence on otherwise unmolested silver-alloy coins indicate that these coins were probably defaced by a pair of government-authorized cancellation dies, each with a convex face studded with diamond-shaped bumps. I suspect that when these coins were declared obsolete, the Indian government decided to make sure they never were used in commerce again.

While the use of cancellation dies would seem to be unnecessarily complex and inefficient, it has been documented elsewhere.

I had previously been told that these indentations were produced when the coins were squeezed in a vise with a studded surface. This form of vandalism does produce a superficially similar pattern, as seen here in a 1941 Lincoln cent provided by Robert (BJ) Neff. The big difference is that the indentations do not fade out peripherally. In fact some of the strongest indentations are seen where they intersect the design rim (which is especially vulnerable to damage).

So what was the U.S. Mint doing with canceled Indian coins? I suspect that they bought them from the Indian government for their silver content. In 1964, total mintages of silver coins in the United States reached an all-time high. The 1-rupee and fractional rupee coins of the 1940s are 50 percent silver. By 1950 (the first year the Indian republic started minting its own coins), silver was no longer being used in any circulating Indian coins. All those obsolete coins must have been a tempting source of foreign exchange for India.

It’s conceivable that bulk shipments of canceled silver coins were received by the U.S. Mint and then transported in tote bins to in-house blast furnaces for melting and metal separation. It’s possible that a few of those coins were accidentally left in the tote bins and subsequently buried under loads of planchets.

Naturally, this chain of speculation needs to be followed up by investigation of Mint archives.