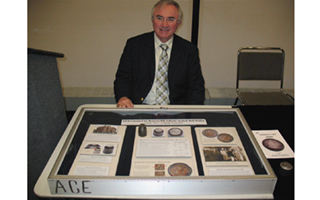 The die was displayed during the regional meeting of the Liberty Seated Collectors Club held in conjunction with the Whitman Baltimore Coin & Collectibles Expo.

Used to mint the first half dollars at the Carson City Branch Mint in Nevada, the die was identified as the one used for die marriage WB-1, Reverse A for 1870-CC half dollars (Complete Guide to Liberty Seated Half Dollars by Randy Wiley and Bill Bugert).

Along with the die, Sundman included a display of background information. Sundman said the exhibit will be available for display at future shows.

For more information, visit the LSCC website at www.lsccweb.org/.