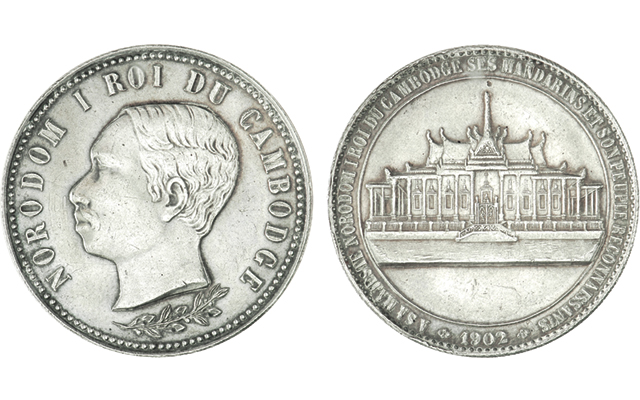 Cambodia’s 19th century King Norodom I is the subject of this commemorative medal. The reverse depicts the façade of the royal palace in Phnom Penh.

When the seemingly familiar proves unfamiliar, numismatists’ interest is aroused. World coin collectors have long known of the 1860-dated silver and bronze coins bearing the portrait and name of Norodom I, King of Cambodia.

Inscribed in French and Khmer, the coins were part of the king’s struggle to preserve his country’s independence against acquisitive neighbors Siam (today’s Thailand) and Vietnam (called Annam by French colonizers).

Once a great Southeast Asian empire ruled from the majestic city of Ankor Wat, Cambodia was reduced to a client kingdom of Siam by 1859. On the 1859 death of King Ang Duong, his son ascended the throne in 1860 as Norodom I and his first coronation took place in the Siamese capital of Bangkok.

Norodom freed his country from Siam’s grasp by turning to France, then extending Cambodia’s control over what became Indochina, partitioning Vietnam into Tongkin, Annam and Cochin-China, and establishing a protectorate over Laos. Cambodia became a French protectorate in 1867 and France arranged a second coronation in 1868 with regalia returned by Siam. French control became nearly absolute in 1884.

The 1860 date on Norodom’s coins is his accession date. The coins were designed by Belgian engraver Charles Wurden but were struck in later years, including restrikes from rusty and dirty dies that show unattractive grainy surfaces. They are listed by Jean Lecompte in his Monnaies et Jetons des Colonies Françaises (second edition, 2007).

The 1902 obverse presents the coinage head and French legend, a sprig of laurel appearing below.

The reverse depicts the façade of the royal palace in Phnom Penh within a solid circle, with French dedication to “His Majesty Norodom I King of Cambodia, Recognized by his Mandarins and his People.”

The edge is plain with no privy or fineness marks.

A number of other coin-relief medals are known for his successors, including King Sisowath I (1904 to 1927), Sisowath Monivong 1927 to 1941), Norodom Suramarit and Norodom Sihanouk.