CSNA board votes to stop printing its award-winning journal 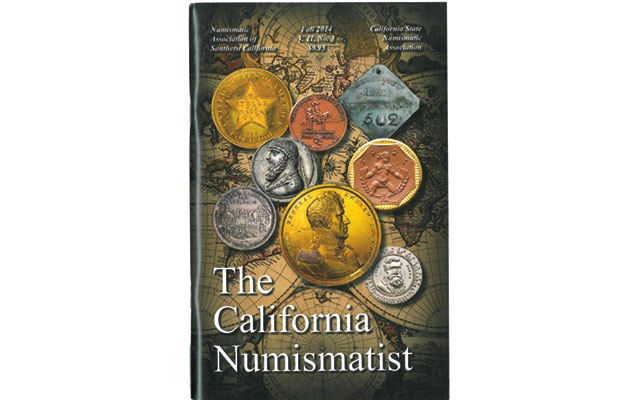 The California State Numismatic Association board has voted to eliminate printing of its award-winning journal, The California Numismatist, to save production costs, and instead to move to a digital format for the publication.

The decision is not necessarily final. The primary obstacle is that for the past 10 years, The California Numismatist has been a joint publication with the Numismatic Association of Southern California, and would likely require NASC concurrence at its Nov. 15 meeting.

NASC officials did not respond to Coin World inquiries.The CSNA board voted to transition The California Numismatist, beginning in 2016, away from the printed journal in favor of a digital presentation, according to outgoing CSNA President Michael S. Turrini.

Greg Burns, who edited both publications and is current editor of The California Numismatist, said the publication merger was implemented to save print costs, since information was duplicated in the two separate publications.

Turrini said the primary reason for going to a digital format for the journal “was, simply, the cost and the burden on our stagnant membership.” Membership has remained between 450 and 500 members for the past five years.

“There might be an action to rescind or reverse or replace the intention toward a digital only approach,” Turrini said. “... The reality is that there are concerns and issues and the outcome might not be to replace or to postpone or something in between.”

“Being that CSNA has the higher membership, then we pay the higher cost towards publication cost, but that does not mean we control the final say,” CSNA Vice President Howard Feltham said. “It must be a joint decision between CSNA and NASC. We have one year to make corrections to this decision.”

Without the NASC’s concurrence to move to a digital journal, CSNA’s action is moot, Feltham said.