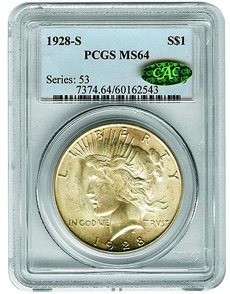 This 1928-S Peace dollar is graded by Professional Coin Grading Service as Mint State 64 and stickered by Certified Acceptance Corp., but what about the $1,418 price paid?

Last week, I suggested that if you want to be a smart buyer you would be very wise to avoid fads in numismatics.

If a coin is selling for a high price and there is lots of excitement about it, perhaps you should look elsewhere if you want to maximize the value of what you buy.

At the Florida United Numismatists convention a few weeks ago, I decided to follow my own advice. I like Peace silver dollars, the 24-coin set minted intermittently from 1921 to 1935.

The obverse design, in my opinion essentially a copy of the face that sculptor Augustus Saint-Gaudens used on the 1907 Indian Head gold $10 eagle, is said to have been modeled from Teresa Cafarelli, wife of sculptor Anthony de Francisci, and perhaps it was in some small part.

The reverse shows a nonwarlike American eagle, wings folded, above the lettering peace.

At the FUN show, I saw several nice Peace dollars that Melissa Karstedt was thinking of buying for Stack’s (now Stack’s-Bowers Numismatics) inventory. I was struck by their beauty and suggested that she build for me a complete set.

Refreshing my memory, I checked prices from the past and noted that in 1989 — that was 22 years ago — Mint State Peace dollars were a hot ticket, a fad, and were selling in many instances for more than double the values of 2011.

And yet, they are just as beautiful now as they were then.

I commissioned her to find Professional Coin Grading Service coins in Mint State 64 grade with Certified Acceptance Corp. “green bean” stickers, get them on approval, and show them to me. She did this, and I found all but one to be of the quality I demanded. I was being “picky.” Why not?

Melissa then added a profit for Stack’s and billed me as follows:

But the prices? Ouch! If you check on the Internet, for example, you might conclude that I vastly overpaid. On eBay on Jan. 23, a 1928-S Peace dollar graded MS-64 by Numismatic Guaranty Corp., no CAC sticker, was offered for $850 “buy it now,” and the same coin, certified as MS-66 by the Numismatic Authentication Co. (with which I am not familiar), offered by a “Top Rated Seller,” was bid up to $74.91. I could see that a prospective buyer could be thoroughly confused.

Here I am, a dealer, seemingly paying far over typical retail prices. Does this make sense?