Buying a story with a coin 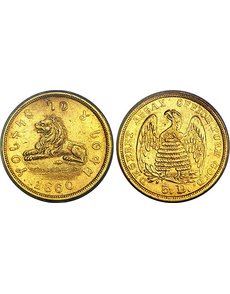 Pioneer gold pieces attract collectors eager to own a coin that is out of the ordinary. This 1860 gold $5 coin issued by the Mormons in Salt Lake City drew 11 bidders and brought a final bid of $80,500.

Nicolas Chow, Sothebys head of Chinese works of art - a category that has exploded in the past three years - wrote this, and I find it wonderfully applicable to the coin market.

Perhaps his words resonate most deeply in specialist areas, with dedicated collector bases that are expanding as the Internet makes information more accessible and better connects people with numismatic objects that may intrigue them enough to open their wallets and set new standards for what a “market price” is.

Token collecting is accessible to most anyone as tokens are generally affordable and available. But, there’s also a high-end to the market.

On June 25 at a Steve Hayden auction featuring Civil War, Hard Times, political and merchant tokens and medals, a rare Loomis Hard Times token from Cleveland, Ohio, realized $13,450 (it had an estimate of $8,000 to $12,000).

According to Hayden, it’s one of just five known and has an ownership history going back to 1916. It was not “fresh to market” — it most recently traded at a Jan. 12, 2009, Stack’s Americana sale where it brought $4,600 and was offered at auction in 1999 and 2008 — but its high price in June was a function of the right venue and the right bidders.

That it was holed and worn wasn’t a detriment to the bidders, who had to ask themselves, “Where will I find another one?”

Pioneer gold has a higher entry point in that even the more common, low grade examples are expensive.

The coin’s design could be described as charming, as the obverse features a seated lion while the reverse shows an eagle behind a beehive.

It graded About Uncirculated 50 and realized a huge $80,500; where another AU-50 example auctioned several months ago at Heritage brought just $51,175.

However, in another example where grades don’t tell the whole story, a visual comparison of the two coins shows that the more recently offered example is of superior quality, with substantially stronger details. Specialists know quality and will pay for it. ¦