Buying a piece of history 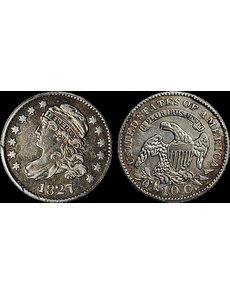 The 1827 Capped Bust dime, JR-10, PCGS Very Fine Details — Cleaning, which sold at public auction Aug. 9 for $12,650, was, in the author’s opinion, the bargain among the David J. Davis Collection of Capped Bust Dimes.

The David J. Davis Collection of Capped Bust Dimes was sold in August by Stack’s Bowers Galleries during the American Numismatic Association World’s Fair of Money in Philadelphia.

David was one of the authors of Early United States Dimes 1796-1837, the standard reference on the early dimes. The book was published in 1984 by the John Reich Collectors Society, with dime varieties attributed by John Reich or JR numbers. The collection was offered as single lots in its entirety as a tribute to the collector. Professional Coin Grading Service certified all of the dimes.

Bidding in an auction can be an exciting, nerve-racking experience. Good preparation is necessary to make split second decisions. I put necessary condition notes in my catalog along with pertinent pricing information from multiple sources so I would not have to cross reference materials during the auction.

Both of the 1828 dimes seem to have brought good prices.