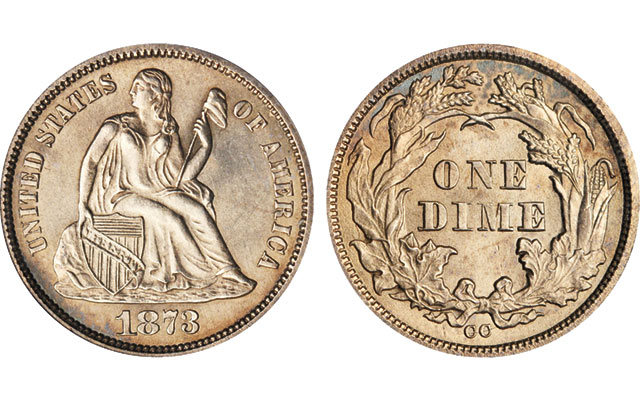 The unique 1873-CC Seated Liberty, Without Arrows dime and its sales history illustrates the merits of a buy and hold investment strategy.

For the past several weeks, our longtime columnist and one of our Coin Values analysts, Gerald Tebben, has been providing a refreshing perspective on coin investing in his blog at www.coinworld.com.

In the series, he applies many of the basic tenets of successful stock investment to the rare coin market. One of the key secrets to successful stock and coin investment is to do your research up front, buy something great, and hold onto it. This strategy has proven financially successful for generations of collectors.

Tebben cites a classic example of this. In 1950 Louis E. Eliasberg Sr., was the underbidder for the unique 1873-CC Seated Liberty, Without Arrows dime at auction. He bid the coin up to $3,625 and was bested by dealer James Kelly’s bid of $3,650.

Sore from the loss, Eliasberg paid $4,000 for the coin several months later, and it stayed in the family for the next two generations.

When it returned to the auction block in 1996 as part of Bowers and Merena’s auction of selections from the Eliasberg collection, it brought $550,000. That number, while robust (especially considering that it was nearly 20 years ago), was below the bidding limit set by the winning bidder, Waldo E. “Pat” Bolen Jr., who told a reporter after the sale that he was prepared to pay a million dollars for it.

In 2012 it sold for $1,840,000 at the Stack’s Bowers Galleries American Numismatic Association World’s Fair of Money auction.

Now, this is an extreme example, but compare a price guide from 2004 with a current one and there are few declines to be found. Even “bread and butter” collector coins like a 1909-S Lincoln, V.D.B. cent in collector grades like Fine show steady and reliable increases over time.

Tebben points out that, as with nearly every investment principle, there are exceptions, like 1950-D Jefferson 5-cent pieces, which are worth less today than they were 50 years ago. However, nice coins, especially scarce and rare ones, tend to go up in value over time.

Buying something of quality and holding onto it over time also limits transaction costs involved with buying and selling, which are larger for collectible coins than they are for stocks.

This strategy requires discipline at two points: first, when purchasing a coin and second, fighting the urge to sell quickly, when the real money may be made with a holding period of decades, rather than years.