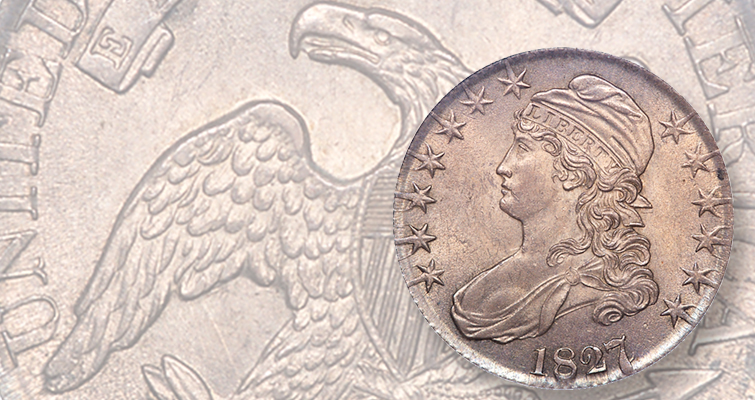 A final price of $7,810 was paid for an 1827/6 Capped Bust half dollar in a Jan. 4 mail-bid sale by Sheridan’s Coins. The coin was graded Mint State 63 by PCGS and it bears a green sticker from Certified Acceptance Corp. 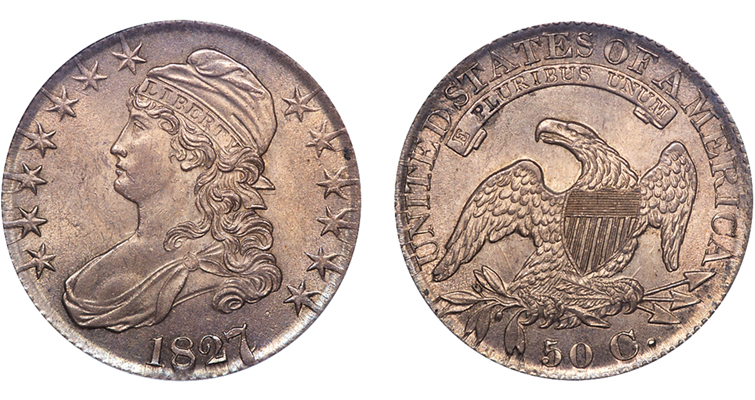 1827/6 Capped Bust half dollar is attributed as an Overton 103 variety, and was one of 76 coins that sold in a Sheridan's Coins Jan. 4 mail-bid sale.

An 1827/6 Capped Bust half dollar graded Mint State 63 by Professional Coin Grading Service and stickered by Certified Acceptance Corp. as being superior for the grade was among the top coins sold in the Sheridan's Coins Jan. 4 mail-bid sale of Bust half dollars.

The sale was held in conjunction with the Florida United Numismatists Convention in Tampa.

Three distinct design types are considered to be of the “Bust” series among silver 50-cent coins: Flowing Hair half dollars, struck in 1794 and 1795; Draped Bust half dollars, dating from 1796 to 1807; and Capped Bust half dollars, struck from 1807 to 1836. Dies were largely handmade during this period, and the slight differences in hand-placement of various design details make it easy to distinguish one die from another. The die marriages that resulted from the pairings of obverse and reverse dies create varieties that collectors avidly pursue.

New technologies introduced circa 1836 resulted in fewer distinctions from die to die, and even though the Capped Bust design continued in use through 1839, the Lettered Edge pieces of 1807 to 1836 and Reeded Edge coins of 1836 to 1839 are generally considered to be of different types or subtypes.

Among the top lots in the sale was one of those die marriages from the handmade die period — an 1827/6 Capped Bust half dollar that is attributed as an Overton 103 variety (the variety attribution is from Early Half Dollar Die Varieties 1794-1836 by Al C. Overton, later updated by Donald Parsley). The obverse of the coin is an overdate variety, with a 7 punched over the 6 in the date. The Overton 103 coin is one of three die marriages that used the same obverse die (each marriage used a different reverse die).

The coin offered realized $7,810, which included the 10 percent buyer’s fee added to the final winning bid.

Another coin in the auction from the same year, also carried a distinctive date and also drew bidder attention. An?1827 Capped Bust, Square Base 2 half dollar, graded PCGS Shield About Uncirculated 58 and bearing a green CAC sticker, sold for $8,855. The coin is the Overton 145 marriage.

Overall, according to the firm, 76 lots were recorded sold from the 88 offered, with total prices realized of $188,351. 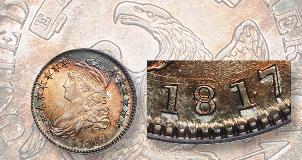 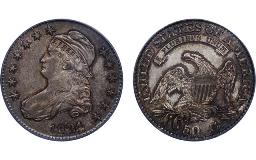 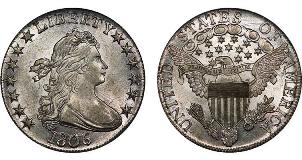