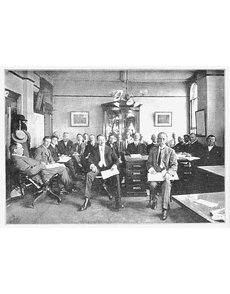 Bidders fill the room at S.H. Chapman’s Gable Collection auction in 1914. No Internet and no established grading system existed back then. To buy effectively, bidders had to attend in person or hire an agent. Today, bidding can be done remotely by the Internet.

One thing that seems to be happening all across American business is change. Nothing is standing still. The status quo doesn’t count.

While you cannot eat (but can order) a hamburger or sandwich on the Internet or sleep in a hotel room in cyberspace (but you can reserve a room), it has been the greatest force in reducing merchandising shops and storefronts the world has ever known. If as a young dealer I went to New York City, the Yellow Pages would have listed many dozens of dealers. It would have taken about three days to “do” them all. Today, I dare say that a day would suffice. Today nearly all the shops are gone, replaced by Internet sellers.

Auction houses have seen a transition as well. At Stack’s Bowers Galleries as well as with our esteemed competitors, a handful of people might attend a sale in person, while countless thousands “attend” on the Internet. Twenty years ago a typical auction gallery was often packed wall-to-wall and the auction house often needed to set up extra chairs. No World Wide Web was in general use.

Since the founding of Professional Coin Grading Service in 1986, more than 100 commercial grading systems have been established. Now, it is PCGS and Numismatic Guaranty Corp., a duopoly, plus some leftovers for everyone else. Perhaps the confusion of having too many services available has prompted this consolidation. Against the real competition of cyberspace, innovation is essential for the continued existence of any bricks-and-mortar business, whether a store or a publishing business. I won’t mention the sorry state of the U.S. Postal Service’s thousands of offices.

Happily, the Internet has not replaced everything. The Guide Book of United States Coins has grown in circulation in recent times, perhaps because it is easier to go to this single source than to look up prices on 10,001 assorted Internet sites.

I like to think that Coin World, dominant among the weekly numismatic publications, will be around for a long time, for it continually produces new ideas — such as the special monthly issue you are reading now.

Both Coin World and A Guide Book of United States Coins are available on iPads, Kindles, Nooks and the like.

However, I for one hope that printed hard copies are around for a long time to come. Hmm.

Q. David Bowers is chairman emeritus of Stack’s Bowers Galleries and numismatic director of Whitman Publishing LLC. He can be reached at his private email, qdbarchive@metrocast.net,
or at Q. David Bowers, LLC, Box 1804, Wolfeboro, NH 03894.