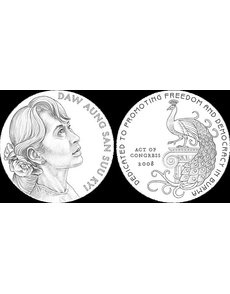 The Citizens Coinage Advisory Committee and Commission of Fine Arts both reviewed the proposed designs illustrated for the Daw Aung San Suu Kyi congressional gold medal to be presented to the Burmese opposition leader Sept. 19. It is not known whether the designs underwent any modifications, since U.S. Mint officials won’t disclose the final designs approved by Treasury Secretary Timothy F. Geithner until that date.

The presentation will be made more than four years after the recognition was approved by Congress. The Daw Aung San Suu Kyi Congressional Gold Medal Act, Public Law 110-209, was signed into law by President George W. Bush on May 6, 2008.

Bronze duplicate medals of the gold medal are to be offered for sale to the public the same day as the ceremony.

The legislation cites the medal is “in recognition of her courageous and unwavering commitment to peace, nonviolence, human rights, and democracy in Burma.”

Suu Kyi, a Nobel Peace laureate and former political prisoner, is to be presented the medal formally during congressional ceremonies being scheduled in conjunction with her visit to the United States. The rulers of Burma, a nation formally known as the Republic of the Union of Myanmar, prohibited her from leaving the nation for more than two decades.

The formal presentation ceremonies are being arranged by the office of Speaker of the House John Boehner, R-Ohio.

Suu Kyi, chair and general-secretary of the National League for Democracy, was placed under house arrest by military leaders before Burma’s 1990 general elections. She remained under house arrest in Burma for almost 15 of the 21 years from July 20, 1989, until her most recent release on Nov. 13, 2010.

On April 1, 2012, NLD officials announced Suu Kyi was elected to the Pyithu Hluttaw, the lower house of the Burmese parliament, representing the constituency of Kawhmu.

Final designs for the Suu Kyi congressional gold medal were approved May 7, 2009, by Treasury Secretary Timothy F. Geithner, but won’t be released publicly until the day of the formal medal presentation Sept. 19, according to U.S. Mint spokesman Michael White.

In addition, the identity of the designer(s) and engraver(s) of the medal will not be disclosed until that time. White said July 19 that the gold medal has already been struck at the Philadelphia Mint.

The Mint’s sales of 1.5-inch and 3-inch bronze duplicate medals will begin at noon Sept. 19.

White said the dies to strike the bronze duplicate medals have already been prepared and some of the medals already struck.

Until the medal designs are released, the public will not know whether recommendations made by two federal design review panels were addressed.

The Commission of Fine Arts approved the sole obverse Suu Kyi medal design presented for the CFA’s review on Feb. 19, 2009, but rejected the sole reverse design that was submitted. The Mint presented no other designs for the medal.

CFA Secretary Thomas Luebke said in 2009 that the reverse design for the Suu Kyi medal needed to be rethought. The members were concerned with a peacock shown on the medal, which they considered not to be aesthetically pleasing, Luebke said.

CFA members also questioned the use of a classical Western column to support the peacock for the representation of Southeast Asian politics, Luebke said.

CFA members also stated that the word BURMA at the end of the inscription was lost because of its nearly upside down positioning below the peacock’s tail, Luebke said. CFA members suggested that the placement of the graphic elements of the design be reconsidered, he said.

During the Feb. 24, 2009, meeting of the Citizens Coinage Advisory Committee, members of that panel approved the same lone Suu Kyi medal designs presented to the CFA for its review just days before.

CCAC members questioned why the Mint did not provide multiple medal designs for review and from which to make recommendations.

The CCAC initially wanted to discuss why the medal does not refer to Burma as Myanmar, the name that the military junta has used since it came to power in 1962.

When told by U.S. Mint representatives that the Congress and State Department prefer to still call the country Burma, the committee members dropped their question. ¦