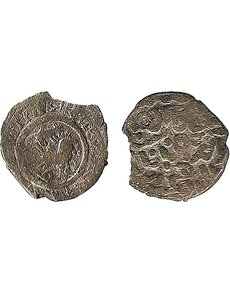 This medieval Russian silver coin had been buried in sulfur-rich soil, resulting in corrosion that has made the coin brittle. The collector is seeking advice on how to preserve the coin from further degradation.

This is the first in a two-part series dealing with a recent reader query.

“I have a couple of medieval Russian silver coins that I have been told are ‘sulfidic,’ meaning that in the past they were buried in soil that contained a lot of sulfur. The silver in the coin has become corroded and the metal can be very brittle and subject to breakage.

“Are you familiar with this situation and can you advise on the preservation of these coins?”

Burying a coin subjects it to a wide variety of environmental factors that can affect its stability and survival.

Corrosion is one of the most obvious results of burial. The rate at which a buried coin degrades depends on the metal or alloy making up the coin, type of soil, its porosity, pH and salinity. Regular readers will remember that silver reacts readily to atmospheric sulfur either in the form of hydrogen sulfide or sulfur hydroxide. This happens in the air and in a burial environment.

A low concentration, only 2 parts per million, of sulfur is needed for silver to corrode and create the corrosion product silver sulfide (argentite). The black layer we see on the reader’s coin is clearly a result of this reaction.

Silver coins are often alloyed with copper. During burial, these coins can develop a green corrosion crust (malachite or atacamite) when the copper in the alloy corrodes preferentially to the silver.

When this happens, it is easy to mistake silver coins for bronze (copper alloy) coins as the corrosion products appear the same.

As the reader noted, his coins are quite brittle. This is very common with silver coins that have come from a burial environment.

If one looks at the metallographic structure of a silver coin alloyed with a small amount of copper, one will see silver with tiny amounts of copper along the grain boundaries.

It is believed that during long-term burial, the intergranular copper undergoes localized galvanic corrosion (because it is less noble than silver). Corrosion of this copper, referred to in the conservation literature as “microstructurally induced embrittlement,” makes the coin brittle.

Susan L. Maltby, Toronto, is a private conservation consultant, with an interest in numismatic preservation.