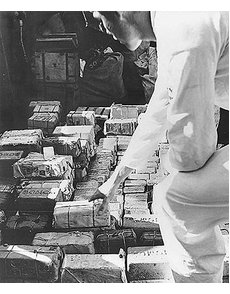 Some of the gold bars and packages of securities are shown on the deck of the submarine USS Trout before being transferred to the light cruiser USS Detroit in Pearl Harbor in Hawaii in March 1942. 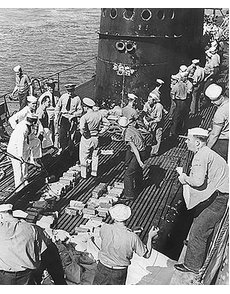 Sailors from the submarine USS Trout pass bags of silver coins to crew from the USS Detroit, where the treasure was held until its transfer to vaults in Honolulu.

Money in the Pacific and European theaters of World War II is the focus of the articles in the recently released summer 2013 issue of the Journal of Numismatic Research by author Roger W. Burdette.

Burdette writes that he dedicated this issue to the “valiant attempts by Filipino and American military and civilian personnel to prevent gold and silver from falling into the hands of the invading Japanese Army at the onset of World War II.”

On Dec. 22, 1941, the American high commissioner took custody of all gold, silver and paper money from banks and the Philippine Treasury to remove the possibility of it falling into enemy hands.

More than $2.7 million in paper currency was burned after a careful accounting by American and Philippine officials. The gold bars and silver coins were hidden in a system of tunnels on the island of Corregidor, according to Burdette.

In January 1942 orders were given to the USS Trout submarine to take much needed supplies of ammo to American forces on Corregidor.

After unloading its cargo of ammo and other supplies, the Trout sailed away from Corregidor on Feb. 3, 1942, with a cargo of gold bars and silver coins, also serving as ballast, toward Pearl Harbor.

The crew and the bullion arrived safely in Hawaii on March 3. The bars and coins were transferred the light cruiser USS Detroit, where the bullion was temporarily held until its transfer to vaults in Honolulu for storage during the war.

After all the gold bullion and some of the Philippine silver coins were smuggled out on the Trout, more than 27,000 bags of silver coins (worth $13.7 million U.S.) remained in Corregidor.

Had it been possible, at least 20 more trips would have been needed to remove the coins from the island, according to Burdette.

Instead, in the interest of keeping the money out of the hands of the Japanese, U.S. officials ordered the silver coins dumped into Manila Bay.

The island of Corregidor surrendered to Japan on May 6, 1942, and Japanese forces quickly learned the location of the silver.

U.S. Navy divers taken prisoner by the Japanese were forced to recover the silver coins, though they engineered as much sabotage of those efforts as possible, Burdette reveals.

Many of the facts Burdette presents of the silver coin recovery are from a private memoir published by one of the American divers, Robert C. Sheats, in his book One Man’s War: Diving as a Guest of the Emperor.

In another article by Burdette in the journal, he tells about stolen gold hidden at the Merkers Kaiseroda salt mine at Thuringia, Germany, and its recovery from June to August 1945.

According to Burdette, “Under orders from Nazi leadership, primarily Hermann Goering and Heinrich Himmler, conquered people and nations were systematically stripped of art, gold and other valuables. Recovery of the treasure after the end of the European war had an unexpected connection to the U.S. Mint.”

The Journal of Numismatic Research is dedicated to original research in American numismatics.

Adobe PDF copies of the journal may be downloaded from the Wizard Coin Supply online at www.wizardcoinsupply.com. Click on the “Coin Books” link on the left side of the home page, then look for the JNR link.