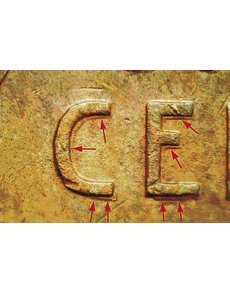 The strong spread to the northwest on 1942 1¢ WDDR-017 is visible here on the CE in CENT, indicated by arrows. 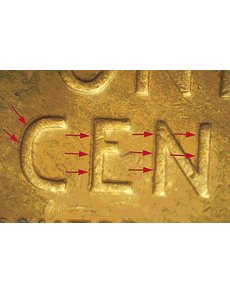 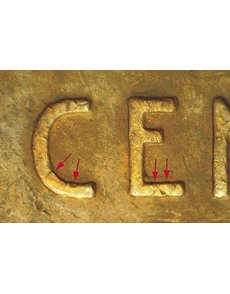 The strong spread is clearly to the south-southeast, shown by arrows, on the CE in CENT found on 1942 1c WDDR-019. 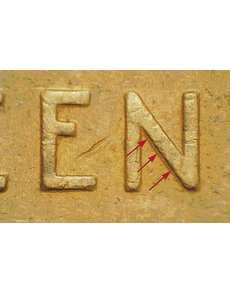 Limited doubling shows on the underside of the diagonal bar of the N in CENT on 1942 1c WDDR-020, shown by arrows. All four of these varieties were submitted by Robert J. Piazza.

Due to space limitations, only four of them will be featured in this column, but I promise that the fifth will be shared in the next installment. All four of the featured doubled die reverse varieties have something in common. They are all Class IV (Offset Hub Doubling) doubled die varieties. Doubled dies of this class have the unique characteristic that all of the doubling is spread in the same direction.

On the first of these from Mr. Piazza, a strong spread to the northwest shows on the ON of ONE and the CEN of CENT. While the affected area is small, the doubling itself is quite strong. I now have this one listed in my files as 1942 1¢ WDDR-017.

A strong spread to the south-southeast shows on the CE in CENT, the TED in UNITED, both of the T’s in STATES, and the ER and second A in AMERICA on the variety that I now have listed as 1942 1¢ WDDR-019. The piece examined was not a high-grade coin. A higher grade coin may show additional points of doubling.

Probably the least spectacular of the four varieties being presented here would be the one I now have listed as 1942 1¢ WDDR-020. A close spread to the north shows on the CEN of CENT with the strongest doubling evident on the underside of the diagonal bar of the N. Once again a higher grade coin may show additional points of doubling.

Start checking your 1942 Lincoln cents very carefully. You never know what you will find.