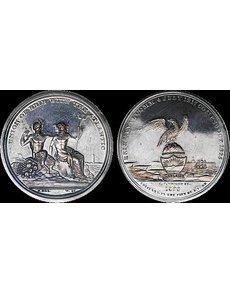 The Erie Canal was a fast and cheap way to travel in the 1820s, but the journey came with a price in comfort.

The canal is celebrated by collectors as the subject of the first medal in Harold E. Hibler’s and Charles V. Kappen’s 1963 catalog, So-Called Dollars (revised and edited in 2008 by Tom Hoffman, Dave Hayes, Jonathan Brecher and John Dean). The medal celebrates the formal opening of the 364-mile canal on Oct. 26, 1825, after nine years of digging. However, the first stretch was opened to travel in 1819, before the entire expanse from New York City to Buffalo was completed.

Philadelphia merchant Thomas P. Cope was an early traveler on the canal and wrote about it in his diary on July 28 and 29, 1820.

“At 9 this morning we went on board the passenger boat Montezuma, Captn. Brown, on the great canal finished from Utica to Montezuma, a distance of 96 miles.

The next day, he wrote: “We were much too crowded last night. Captn. B. says he can accommodate 10 or 12 passengers with comfort and does not wish more, whereas there are 21 of us. The women occupied all the berths & the men spread themselves on the settees & on the floor & were said to fare better than their fair companions, who complain of having been annoyed by vermin.

“[Son] Alfred, who slept on the floor, got up with one arm much swollen and inflamed, apparently from the bite of some insect.”

The trip, he wrote, took 33 hours, including the time it took the towpath boy to recover from falling off his horse in the dead of night. Cope noted, “We had 4 meals on board & for these & passage paid $4 each.”

He wrote, “None of our company probably regret having taken it, but none, I believe, would be willing to renew the trip.”

While through passengers paid $4 for the trip, passengers who got on and off paid 3 cents a mile.

The coins used to pay the fare were likely worn Spanish colonial silver pieces and Bust half dollars, quarter dollars and dimes.

The medal, which was distributed in gold, silver and white metal to guests at an 1826 celebration in New York City, is widely popular.