Building a set of Kennedy half dollars very accessible pursuit 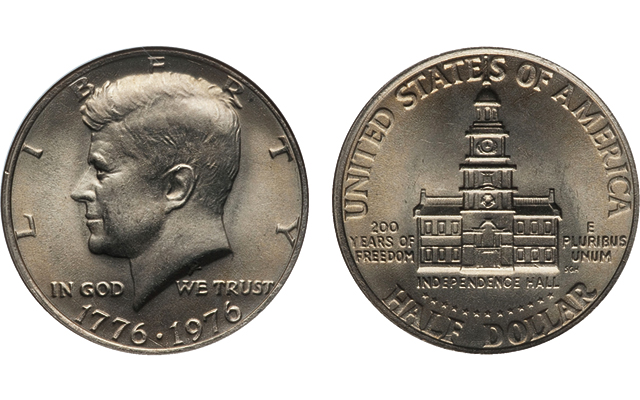 Only 17 examples of the 1776–1976 Kennedy, Bicentennial half dollar have been graded Mint State 67 by Numismatic Guaranty Corp. and Professional Coin Grading Service combined; examples trade for more than $1,000.

Kennedy half dollars are very accessible. A collector at almost any budget building a complete set in Mint State condition will encounter no unobtainable coins. At the same time, collectors seeking the best quality examples encounter many challenges locating coins. This dichotomy of plenty and scarcity is a hallmark of collecting modern coinage.

Kennedy, Bicentennial half dollars illustrate this well. In 1975 and 1976, the Mint released a circulating commemorative half dollar. The obverse stayed the same except for its dual date, 1776–1976. The reverse of the half dollar replaced the Heraldic Eagle with Independence Hall alongside the legend 200 YEARS OF FREEDOM.

The U.S. Mint made 234 million at the Philadelphia Mint and 287 million at the Denver Mint for circulation. Plentiful and worth only a couple dollars in average Uncirculated condition, as superb gems the coins are scarce and valuable. Only 17 examples of the 1776–1976 half dollar are graded Mint State 67 by Numismatic Guaranty Corp. and Professional Coin Grading Service combined; these trade for more than $1,000.

At the same time, choice examples can be found in both 1975 and 1976 Uncirculated Mint sets, which trade for less than $10 each.

The 1982-P half dollar mintage is only 10.8 million coins. It is quite a challenge to find in gem Uncirculated condition. The 1983-P issue, 34.1 million struck, is even more difficult to locate in superb grades. The Denver Mint coins from those years are generally better quality.

In complete contrast, in 1987 the Kennedy half dollar was issued only in Uncirculated Mint sets. Since 2001, the half dollar has been issued only for direct purchase from the Mint, in $10 rolls, $100 bags and Uncirculated Mint sets. As the coin transitioned from currency to collectible, mintage figures plummeted, yet high grade examples of later issues remain plentiful — for now.

From this era, one coin stands out. In 1998, a Robert F. Kennedy commemorative silver dollar was issued and paired in a “Brothers set” with a 90 percent silver Kennedy half dollar struck at the San Francisco Mint. To match the two coins, the half dollar was given a Matte Finish. Just 62,000 were sold, making it a key date in the modern series.