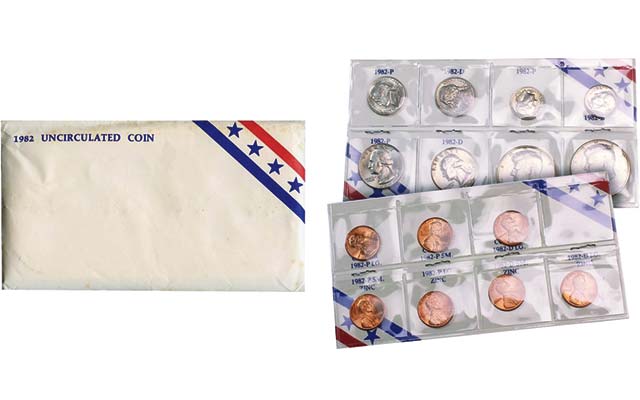 Privately issued 1982 and 1983 Uncirculated Mint sets are found today in a variety of packaging options. The 15-coin 1982 set show is housed in an envelope and in sheet-type coin holders.

New collectors are often puzzled by the fact that the U.S. Mint did not produce Uncirculated Mint sets for the years 1982 and 1983.

The gap in Uncirculated set production occurred ostensibly because of across-the-board budget cuts ordered by President Reagan soon after he was sworn into office in January of 1981. Reagan had won election on a platform of holding down federal hiring and government expenditures.

In April of 1981, Treasurer Angela “Bay” Buchanan told members of Congress that in order to meet the President’s mandates the Mint would request funding for 179 fewer full-time positions in the 1982 budget and that because of the reduction in the workforce something else had to go.

Mint officials admitted they deliberately chose to drop one of the Mint’s most popular products — annual Mint sets containing Uncirculated examples of each coin struck for circulation — from its product line and they fully anticipated that 1981 would be the last production year for Mint sets.

Collectors immediately questioned the decision. Sales of Uncirculated Mint sets had steadily increased, with sales of the 1977 Mint sets breaking for the first time the 2 million threshold, and 1981 sales were at the 2.9 million level.

But Mint managers identified the Uncirculated Mint set program as the most “expendable” because collectors could obtain Uncirculated coins from bags and rolls in order to build their sets.

The Reagan manifesto to reduce government spending incorporated the theory that the private sector could do many things more efficiently and cheaper than government agencies. Mint officials were not naive. They knew private sector companies would step in to package and market Uncirculated sets.

Acting Mint Director Dr. Alan J. Goldman (Donna Pope had not yet been confirmed as director), referring to the private-sector theory, observed: “I think it’s worthwhile just letting nature take its course and see whether that in fact is true or not.”

Entrepreneurs did take on the challenge. Hence, today, 1982 and 1983 Uncirculated sets can be found in a variety of packaging. But all lacked the quality of Mint packaged sets, and prices were not lower.