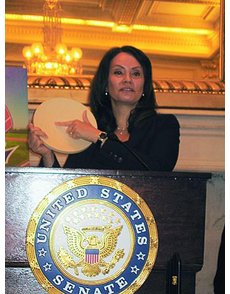 Rios explains the coin design contest while holding a plaster model showing the Mint’s design competition logo on the convex side and “the winner is” on the concave side. 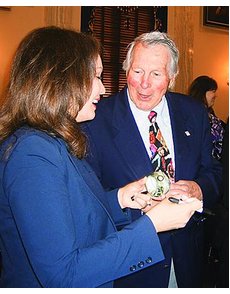 U.S. Treasurer Rosie Rios signs what appears to be a $100 bill on a “money ball” presented to Brooks Robinson. 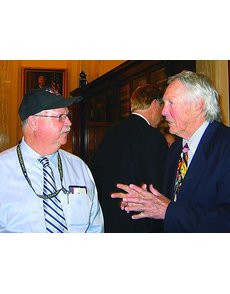 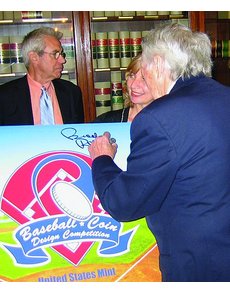 At 75, Brooks Robinson can still throw a good one liner or two.

The legendary Baltimore Orioles third baseman was the U.S. Mint’s choice to kick off the Mint’s design contest for the shared obverse of the 2014 National Baseball Hall of Fame commemorative coins.

And once again the man nicknamed “The Human Vacuum Cleaner” for his fielding delivered.

Robinson regaled a small crowd of coin collectors in an ornate Senate hearing room April 11 as he helped launch a design contest for the common obverse of three coins that benefit the Cooperstown, N.Y., baseball museum where he and other baseball greats are enshrined.

It’s not easy being one of those honored for a career that few of today’s young people remember, Robinson told the audience in the Senate Agriculture Committee hearing room.

He recalled driving up to a retirement home and being greeted by a senior who he believed could remember his baseball career.

“Do you know who I am?” Robinson eagerly asked the man.

“No, but that lady over there will know who you are and which room you are in,” the man told Robinson.

Robinson predicted that the set of three baseball coins will be an overwhelming success because “everyone has a baseball memory.”

That’s about as precise as the 30-minute ceremony got about details of the coins or the contest.

U.S. Treasurer Rosa “Rosie” Gumataotao Rios pointed out that the New York baseball museum could get $9.5 million in surcharges from the coins if all the 1.2 million gold $5 half eagles, silver dollars and copper-nickel clad half dollars are sold.

And she said the Treasury Department hopes the first “curved” coins ever produced by the U.S. Mint will prove to be a model for the production of similar other coins by other nations.

But little discussion was held about the technical features of the unusual gold coin and silver coin, which will each have convex and concave sides. The half dollar will be a flat, traditionally shaped coin.

Mint officials were predicting that they would be flooded with proposed designs for the coins as soon as the competition opened, about an hour after the ceremony.

Any U.S. citizen or permanent resident aged 14 and above may enter the contest, which will remain open until noon May 11 or until 10,000 entries are received.

The winner of the contest will be awarded $5,000 and have his or her initials appear on the coins.

The Mint is sponsoring a separate contest for children 13 and under, called “A Kid’s Baseball Coin Design Challenge.”

The winner of that contest will receive one of the silver dollars and a certificate, according to the Mint.

Entries for the design contest and rules for the competition may be found at the Mint’s website, www.usmint.gov.

Designs are to be submitted at www.challenge.gov.

Information about the kid’s challenge program is at www.usmint.gov/kids/kidsbatterup.

After the ceremony, Rios presented Robinson with a “money ball.” It was a baseball covered by what appeared to be a $100 bill.

She signed the bill for Robinson, after having given him and others her autograph on other pieces of paper currency.

“You know something is wrong with the world when Brooks Robinson is asking for my autograph,” she joked.

Robinson autographed contest posters for the design contest and baseballs during the ceremony.

He also said he was going to be one of judges of the design contest and was looking forward to reviewing the designs.

“Every American can support baseball through these coins,” he said.

Rep. Richard Hanna, R-N.Y., one of the House sponsors of the baseball coin legislation, pointed out that passage of that measure was proof that bipartisan cooperation was still possible in Congress and “a sign that we can get something done.” ¦