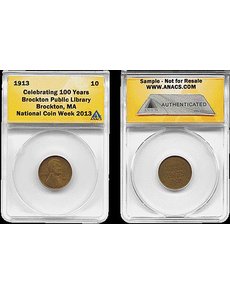 The celebration of National Coin Week at the public library in Brockton, Mass., included the distribution of this 1913 Lincoln cent encapsulated by ANACS. The library is celebrating its centennial in 2013.

This year is the seventh year that Brockton, Mass., has celebrated National Coin Week at the Brockton Public Library at 304 Main St.

The first year, the first celebration of NCW was held in the basement of the West Branch, with 27 attending. Interest has grown so much that the festivities have been held the last four years in the largest room the library has to offer. On the average, Brockton’s NCW events have drawn 90 enthusiasts, and attendance this year was no different.

This year the National Coin Week theme was “Black Diamond Shines Again: Buffalo Nickel Centennial.” We piggybacked off this topic to also celebrate the Centennial of the Brockton Library with an ANACS-encapsulated 1913 Lincoln cent. Each coin’s slab reads “1913 1C / Celebrating 100 Years / Brockton Public Library / Brockton, MA / National Coin Week 2013.” I sent 150 cents to be slabbed, and everyone in attendance received this special slab, which opened the door to explaining the concept of third-party grading.

I’d like to thank ANACS for encapsulating the coins.

When I first brought NCW to Brockton, I did it by myself. Then, four years ago, I wanted more from collecting and, being a life member of the American Numismatic Association, I searched for local clubs to join. Since then, the Boston Numismatic Society, the Collectors Club of Boston and the Currency Club of New England have been involved in the annual celebrations. This year’s experience included an introduction by James Johnston Jr. on the history of Black Diamond and how he was served at the dinner table.

The second speaker was George Bilodeau, who discussed “Lighter Than Air: History and Collectibles Related to Balloons and Zeppelins.”

Brockton’s National Coin Week event also had the presence of the state representative for the community, Michael D. Brady, and city councilor at large Jass Stewart; they presented each speaker with a citation and read a proclamation from the mayor’s office.

The last few years and this year we had the great fortune to have our observance of NCW recorded by the community cable and played for the city and surrounding areas to enjoy!

One of the young numismatists, Samir Bouchaiba, made his own coin design and was given many items, including a piggy bank, backpack from the U.S. Mint, a $2 United States note and much more.

Everyone who stayed till the end of the celebration won all types of collectibles, from books to slabbed coins to world paper money. The giveaway items were donated by club members or I purchased them.

I would like to thank L & C Coin, Littleton Coin Co. and West Side Stamp and Coin Co. for their contributions to this year’s National Coin Week.

I also apologize to anyone I have left out who rallied around Brockton’s celebrations of the centennials of Black Diamond and the library.

Richard Hand Jr. is a life member of the American Numismatic Association and a frequent exhibitor during National Coin Week.