The Joys of Collecting: Can't sit still and do nothing 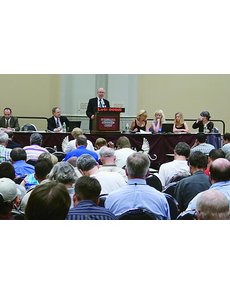 Q. David Bowers serves as an auctioneer before a packed auction gallery at the American Numismatic Association World’s Fair of Money in Philadelphia in August 2000, in the era before live bidding on the Internet.

The world is changing and at warp speed. The catalyst is modern technology — the Internet, cell phones, iPads and iPods, and instant everything. Why leave home and your computer screen? It has everything, or almost.

It used to be that perhaps 15 to 20 dynamic conventions were held around the United States each year. The list of events that have disappeared is a long one. Today, the top shows include the American Numismatic Association World’s Fair of Money, the Florida United Numismatists show and the three Whitman Coins & Collectibles Expos in Baltimore. Others are held, to be sure, but the regional conventions are not what they once were.

Certified coins have a lot to do with this. In 1970 if I wanted to “do” a show, I needed at least a couple of days — visiting dealers, looking through their inventories (usually housed in paper envelopes or “Capital” holders) and figuring out the grades. Some coins marked “BU” (Brilliant Uncirculated) were About Uncirculated at best, and “Proofs” often weren’t.

As a numismatist I needed to have expertise on grading, pricing and authenticity (fakes and alterations were common).

Today, most expensive coins are in certified holders on display. To “do” a show takes less than a day, even including specialties such as tokens, medals and paper money. No need to spend two or three days or more. Or, I can stay home completely and shop a far wider selection on the Internet.

Auctions that used to be held in packed galleries are now mostly on the Internet. Hit the “Bid” button and you are there — even though you may be in your living room. “Attendance” is now in the countless thousands with bidders from all over the world. Auctions are more active than ever, but not at shows, where lots of action occurs via the Internet camera, but with far fewer in-person attendees.

The ANA used to have about 32,000 members. Today, the number is about 25,000. At the same time, the rare coin market is very dynamic, the level of activity is higher than ever and excitement knows no limits.

What, if anything, can be done to increase society memberships and convention attendance? In the 1970s and 1980s the ANA used to hold Roundtable meetings in which collectors, dealers, scholars and the press met for an intense day of discussing problems, pleasures and potentials — resulting in many positive results.

Perhaps it is time for the ANA to do this again? Or, should we all sit back, do nothing and see what happens?