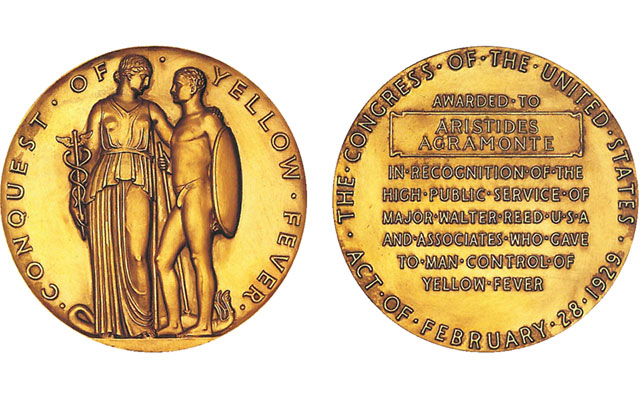 The 1929 congressional gold medal awarded to Dr. Aristides Agramonte, one of nearly two dozen medical researchers awarded for their involvement in the fight against yellow fever, was sold at auction in 2004 for $8,337.50.

This is the third in a series of articles on congressional gold medals struck by the U.S. Mint:

Breakthroughs and contributions in the field of medicine and medical research are recognized by a number of congressional gold medals.

Among the recipients, and the years the medals were authorized, are:

??Dr. Jonas Salk, 1955, for discovering a serum for the prevention of polio.

??Dr. Michael Ellis DeBakey, 2007, for his pioneering work in the field of cardiovascular surgery.

One authorizing act from 1929 honors Maj. Walter Reed “and associates” for yellow fever experimentation in Cuba. Twenty-three gold medals, each with the respective recipient’s name engraved on the back, were produced. Each of the medical personnel recipients associated with Reed and named in the medal’s enabling legislation served as a volunteer. For their efforts, Congress established a fund for gold medals for each along with a $125 monthly stipend for life.

The gold medal awarded to one of the recipients, Dr. Aristides Agramonte, is in collector hands after having been sold by Stack’s on Oct. 12, 2004, among the lots in the John J. Ford Jr. Collection, Part V, where it realized $8,337.50.

The Cuban-born Agramonte developed an immunity to yellow fever as a youth and was appointed pathologist to the Commission on Yellow Fever in Havana (1898 to 1902) where he served as acting assistant surgeon in the United States Army Medical Corps.

The 62.8-millimeter and 6.2-ounce medal’s obverse shows the figure of Health standing to the left, her left hand on the right shoulder of a young warrior who has just slain a dragon lying at his feet. Inscribed around is CONQUEST OF YELLOW FEVER.

The award citation is inscribed on the medal’s reverse.